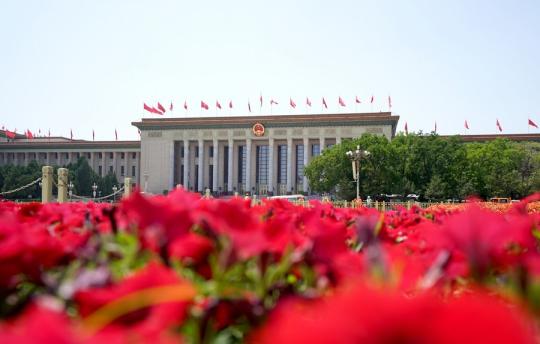 Photo taken on May 28, 2020 shows a view of the Great Hall of the People in Beijing, capital of China. (Photo/Xinhua)

China's top leadership laid out priorities on Thursday for economic policies in the second half of the year, pledging to make steadfast efforts to expand domestic demand, protect and energize market players, and bolster the stability and competitiveness of industry and supply chains.

The meeting of the Political Bureau of the Communist Party of China Central Committee also adopted a decision to hold the Fifth Plenary Session of the 19th CPC Central Committee in October, which will deliberate on the country's 14th Five-Year Plan (2021-25) and long-term targets for 2035.

Fiscal policies must be more proactive, pragmatic and meet the funding requirements for the construction of major projects while giving priority to quality and efficiency. Monetary policy should be tailored in a way that is more flexible and appropriate, said a statement released after the meeting.

While enabling a significant cut in financing costs across the board, policymakers said the newly added financing must flow mainly to the manufacturing sector and smaller firms.

The meeting also called for more coordinated macroeconomic policies so that fiscal and monetary policies can function in integration with policies in the fields of employment, industry and regional development.

Participants highlighted the better-than-expected performance of the economy in the second quarter, which grew by 3.2 percent year-on-year despite headwinds, noting that the economic recovery is on stable footing and business reopenings are picking up month by month.

However, they also pointed to a complex and challenging economic performance that is still grappling with instabilities and uncertainties.

"Many of the problems we face are mid-and long-term, and they should be seen from the perspective of a protracted war," read the statement.

The meeting reiterated the importance of accelerating the formation of a new mode of development with domestic economic cycles being the mainstay and domestic and international economic cycles complementing each other.

A mid-and long-term coordination mechanism for epidemic containment and socioeconomic development will be established, and the country will rely more on innovation in science and technology and the optimizing of cross-cycle design and adjustment in macro regulation to attain a longterm balance between stabilizing growth and preventing risks, the statement said.

The meeting pledged unrelenting measures in epidemic containment, with steps to shore up reserves of medical resources and accelerate international cooperation in this regard.

In expanding domestic demand, the country will give a further boost to consumption and the upgrading of consumer spending while overcoming the impact of COVID-19.

It is important to proactively scale up effective investment, encourage the involvement of private capital and speed up the construction of new infrastructure, the statement said.

The meeting reiterated that housing is for habitation, not speculation, and said that the development of a more optimized fundamental system for the capital market will be moved forward. It also pledged to crack down on violations of the law in the securities sector.

Effective measures will be adopted to reduce the impact of the pandemic on youth employment, and more services will be offered to rural migrant workers in the job market, the participants said.

In planning for China's development during the 14th Five-Year Plan period, the meeting underlined the need to unwaveringly implement the new development philosophy, coordinate development and security, and modernize the governance system and capacities.

The new development philosophy should be implemented throughout all sectors to attain more equitable, sustainable growth with higher quality, improved efficiency and greater security, the statement said.

The country must remain committed to reform and opening-up and make sustained efforts to beef up the momentum and vitality of its growth, it added.

The meeting followed a symposium in Beijing on Tuesday convened by the CPC Central Committee to solicit opinions from non-Party members on economic performance and work for the second half of the year.

While chairing the symposium, Xi underscored that the current economic performance must be put in the right perspective, and greater strides must be made in the comprehensive deepening of reform to solve the various risks in the course of development and reduce risks, challenges and pressure from various fronts.

China has strong resolve, a firm will and robust national strength to respond to challenges, and it possesses adequate confidence, capabilities and wisdom to overcome various risks and tests, he said.

No country or individual can stand in the way of the rejuvenation of the Chinese nation, he said.

With epidemic containment in a stable situation and economic performance restored, the country must ride on this momentum in the next two quarters, consolidate outcomes on these two fronts and make up for the losses in the first half of the year, he said.