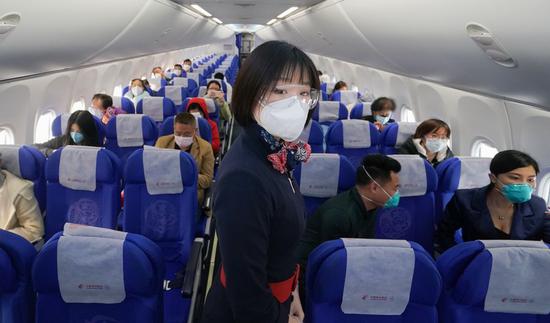 The number of inbound and outbound passengers in coronavirus-hit Wuhan has exceeded 660,000 since the megacity lifted outbound travel restrictions on April 8, said local authorities Wednesday.

Over the past week, the city has resumed the operation of railways, airport, highways and parts of public transport lines in an orderly manner, said Liu Ziqing, deputy mayor of Wuhan.

At present, Wuhan has reopened 17 railway stations and all domestic flights except flights to Beijing. The inner provincial services of nine long-distance coach stations have been restored.

The airport in Wuhan has seen 949 flights and the passenger throughput has reached 41,000 trips since the city's lockdown was lifted. The airport has been thoroughly disinfected twice a day, and key areas have been also disinfected every two hours, said Zhou Xueyun, general manager of Hubei Airport Group.

Liu Nanhua, deputy chief of the city's public security bureau, said the city has seen the number of vehicles in transit return to 80 percent of normal levels since April 8.