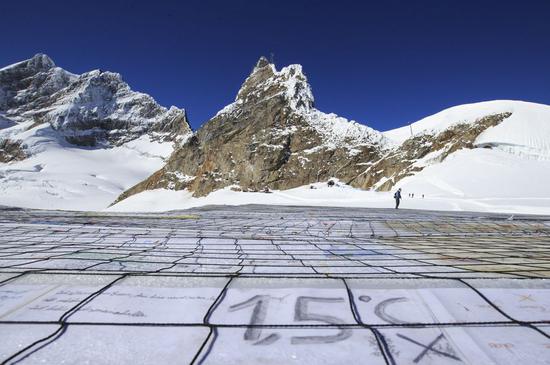 A gigantic postcard with the writing of 1.5 degrees Celsius is seen on the Aletsch glacier under Jungfraujoch in Switzerland, on Nov. 16, 2018. At the center of the postcard was a huge slogan reading "STOP GLOBAL WARMING #1.5 C" to signify the goal of limiting global warming to a maximum of 1.5 degrees Celsius, a target set by the Intergovernmental Panel on Climate Change (IPCC). (Xinhua/Xu Jinquan)

Average temperatures of the past decade are almost certain to be the highest driven by greenhouse gases from human activities, the World Meteorological Organization (WMO) said Tuesday.

The WMO released a report on the sidelines of the ongoing 25th UN Climate Change Conference (COP25) in Madrid.

According to the report named "Provisional Statement of the State of the Climate 2019," this year is "on course" to be the second or third warmest on record, with the global average temperature around 1.1 degrees Celsius higher than the pre-industrial era.

Concentrations of carbon dioxide in the atmosphere hit a record level of 407.8 parts per million in 2018 and continued to rise in 2019. CO2 lasts in the atmosphere for centuries and the ocean for even longer, thus locking in climate change, according to the report.

Sea level rise has accelerated since the start of satellite measurements in 1993 because of the melting of ice sheets in Greenland and Antarctica, and seawater is 26 percent more acidic than at the start of the industrial era, says the report.

"If we do not take urgent climate action now, then we are heading for a temperature increase of more than 3 degrees Celsius by the end of the century, with ever more harmful impacts on human wellbeing," Petteri Taalas, secretary-general of the WMO said in a statement.

"We are nowhere near on track to meet the Paris Agreement target," Taalas added.

The Paris Agreement 2015 stipulates that all parties are committed to making sure global warming stayed "well below" 2 degrees Celsius above pre-industrial levels. Participating countries agreed to "pursue efforts" to limit the temperature rise to 1.5 degrees Celsius.

The WMO's report echoed the annual emissions gap report by UN Environment Programme (UNEP) released last week, which said that countries must make an unprecedented effort to cut their levels of greenhouse gases in the next decade to avoid climate chaos.

Over 26,000 participants took part in the two-week COP25 to discuss the implementation of the 2015 Paris Agreement, amid an unclear future of the global efforts.

On a daily basis, the impacts of climate change play out through extreme and "abnormal" weather, Taalas said.

Heatwaves and floods which used to be "once in a century" events are becoming more regular occurrences. Countries ranging from the Bahamas to Japan to Mozambique suffered the effect of devastating tropical cyclones. Wildfires swept through the Arctic and Australia.