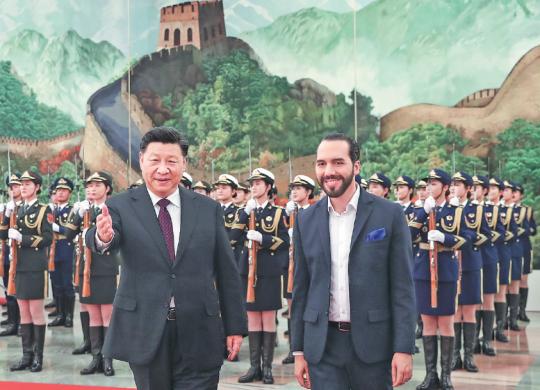 Xi said that China is willing to provide assistance to El Salvador within its ability and welcomes El Salvador to jointly build the Belt and Road and turn the two countries' complementary advantages into mutually beneficial outcomes.

The establishment of diplomatic ties between the two countries last year opened the gate of bilateral cooperation, conformed to the trend of historical development and addressed the fundamental interests of both peoples, Xi said.

Xi said that Bukele's decision to maintain and develop China-El Salvador relations shows a statesman's strategic insight and spirit of responsibility, adding that he agrees with his counterpart's opinion that this relationship has a promising future with bright prospects.

China stands ready to work with El Salvador to enhance mutual trust, expand exchanges and boost cooperation on the basis of mutual respect and noninterference in each other's internal affairs, Xi said.

He said that China is willing to expand imports of more high-quality products from El Salvador.

China is the Central American country's second-largest source of imports. Bilateral trade volume between the two countries was $1.09 billion last year, according to the General Administration of Customs.

He said China welcomes people from all walks of life in El Salvador to visit China and strengthen people-to-people exchanges to push for the long-term, sound and stable development of bilateral ties.

Bukele said he believes that cultivating relations with a great country and a sincere friend like China will bring opportunities for his country's development as well as concrete benefits to its people.

Bukele said he hopes to learn from Xi's experience in governance, and he will work hard to develop long-term friendly relations with China.

His country fully abides by the one-China principle and supports China in its effort to realize peaceful reunification, he added.

President Xi held a welcoming ceremony for Bukele before their meeting.

After the meeting, the two leaders witnessed the signing of several cooperative documents. The two countries also issued a joint statement.

Earlier on Tuesday, Premier Li Keqiang met with Bukele and urged both sides to jointly uphold the political foundation of bilateral relations and expand win-win cooperation.

Bukele's six-day visit, which ends on Friday, will also take him to Shanghai.