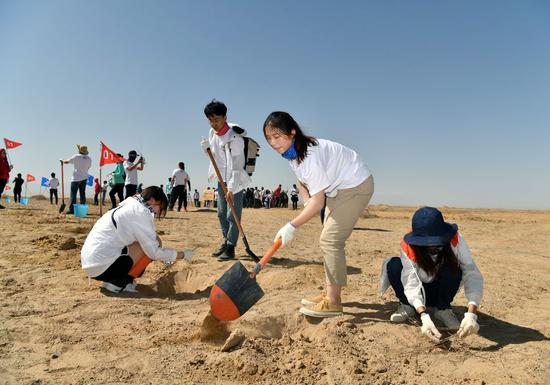 A conservation initiative by a global Chinese firm has won the 2019 Champions of the Earth award, the UN highest environmental honor, according to a statement from UN Environment (UNEP) issued on Thursday in the Kenyan capital Nairobi.

Ant Forest, a green initiative on the world's leading payment and lifestyle platform Alipay, was honored on Thursday for turning the "green good deeds of half a billion people" into real trees planted in some of China's most arid regions.

The UN agency recognized Alipay Ant Forest in the 'Inspiration and Action' category, where the firm beat dozens of other competitors. Ant Forest, which was launched on Alipay by Ant Financial Services Group, promotes greener lifestyles by inspiring users to reduce carbon emissions in their daily lives and protect the environment.

Alipay Ant Forest users are encouraged to record their low-carbon footprint through daily actions like taking public transport or paying utility bills online. For each action, they receive 'green energy' points and when they accumulate a certain number, an actual tree is planted. Users can view images of their trees in real-time via satellite.

Since its launch in August 2016, Ant Forest and its NGO partners have planted some 122 million trees in China's driest areas, which include regions in Inner Mongolia, Gansu, Qinghai and Shanxi. The trees cover an area of 112,000 hectares, with the project becoming China's largest private sector tree-planting initiative.

"Alipay Ant Forest shows how technology can transform our world by harnessing the positive energy and innovation of global users," said Inger Andersen, executive director of UNEP, in a statement issued on Thursday.

"Although the environmental challenges we face are daunting, we have the technology and the knowledge to overcome them and fundamentally redesign how we interact with the planet. Initiatives like Alipay Ant Forest tap into the best of human ingenuity and innovation to create a better world," she added.

Jing Xiandong, the chairman and chief executive officer of Ant Financial, said in a statement that the firm is honored to receive the environmental award.

"Alipay Ant Forest reflects our belief that technology can and should be harnessed for social good. We are grateful to our many users and partners who have joined our efforts to plant 122 million trees and advance a shared vision of sustainable and inclusive development. Alipay Ant Forest's popularity shows that the public is ready to take action to combat climate change," he added.

Champions of the Earth is the UN's flagship global environmental award, established by UNEP in 2005 to celebrate outstanding figures whose actions have had a transformative positive impact on the environment.

From world leaders to environmental defenders and technology inventors, the award recognizes trailblazers who are working to protect our planet for the next generation.

Alipay Ant Forest is among five winners this year, with the other categories being Policy Leadership, Entrepreneurial Vision and Science and Innovation. The 2019 laureates will be honored at a gala ceremony in New York on Sept. 26 during the 74th UN General Assembly.

The Champions of the Earth awards have previously recognized Chinese innovations and change-makers, particularly in the fields of tackling pollution and desertification.

Last year, the Zhejiang Green Rural Revival Program won the award for inspiration and action for its work to regenerate polluted waterways and damaged lands; and in 2017, the Saihanba Afforestation Community was recognized in the inspiration and action category for transforming degraded land on the southern edge of Inner Mongolia into a lush paradise.