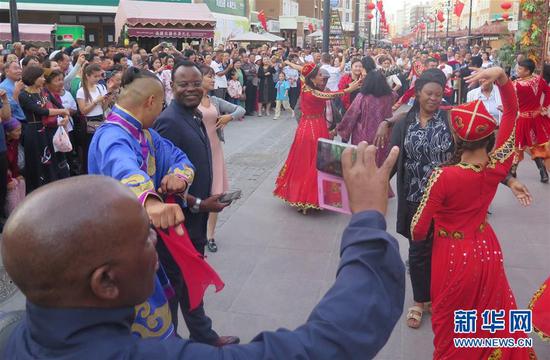 A delegation of envoys from 16 African countries and the African Union visited Xinjiang Uygur Autonomous Region from Sept. 9 to 12 at the invitation of the regional government.

Diplomats from countries including Burundi, Uganda, Lesotho, Sudan and Zimbabwe went to the cities of Urumqi and Turpan, where they visited communities, mosques and companies.

They praised the Chinese government's efforts in promoting social harmony, safeguarding citizens' freedom of religious belief and inheriting the traditional culture of ethnic minorities, saying that China and African countries should strengthen exchanges and cooperation in combating terrorism and eliminating extremism.

"We have seen that the local government has taken various measures to promote national unity and maintain social harmony, achieving positive progress. At the same time, it has vigorously promoted the development of cultural undertakings, which is conducive to the national unity and can have a positive impact on national development," said Mbazumutima Martin, Burundi's ambassador to China.

The diplomats watched an exhibition on major terrorist cases in the region and visited a vocational training center in Turpan's Gaochang District.

Chrispus Kiyonga, Uganda's ambassador to China, said that Xinjiang had adopted many effective methods to combat violence and terrorism and guided young people on the right path through education and training. African countries, including Uganda, abhor terrorism and are willing to learn from Xinjiang's advanced experience and cooperate with China in combating terrorism, he said.

"I agree with the practice of the center, which shows that the government is responsible to its people. The students here are happy and learn a lot of practical skills," said Lechoo D. Setenane, Lesotho's ambassador to China, after visiting sewing, e-commerce and other vocational skill training classes and students' dormitories.

The envoys spoke highly of China's religious policy during their visit. "The mosque, which has a history of several hundred years, is well preserved," said Kadar Robleh Kadieh, Djibouti's counselor to China, after visiting a mosque in Gaochang. "The mosque is in good order in terms of management and worship."