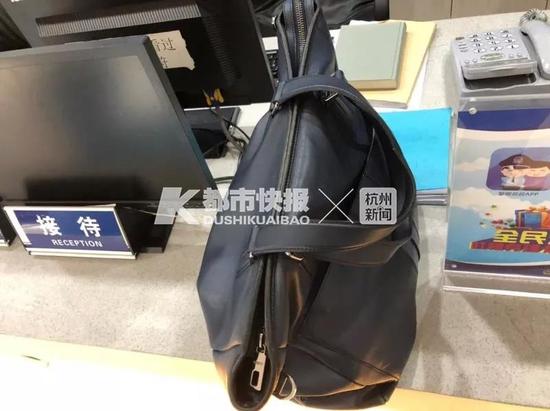 The bag found by Lu. /Photo via Dushikuaibao

After returning a bag with 10,000 yuan (about 1,440 US dollars), 75-year-old Lu has received a surprise of her own: a new jacket and sweater from an anonymous donor.

The nightlife is vibrant near Huanglong Sports Center in east China's Hangzhou City. To help the family, Lu used to sell flowers around this area every night.

Earlier this month, Lu found a black bag in front of a bar at 3:00 a.m., when she finished selling her flowers and was about to head home.

"I didn't pick it up at first. I thought it was someone who put it there temporarily. But after a while, no one went to get it. I guess someone might have lost it by accident,” recalled Lu.

Besides a wallet and some certificates, there was a thick wad of cash in the bag.

“So much money! The owner must be really anxious,” said Lu as she decided to wait for the owner.

With the temperature dropping to about 50 degree Fahrenheit in early winter, Lu sat by the roadside for hours until dawn. However, the owner didn't show up.

After hearing the story, Lu's daughter went with her mom to the local police station to turn the bag in. The police found the owner after finding an ID card in the bag. After being told that his bag was picked up by an old woman, the owner, surnamed Xu, asked to thank her in person.

“I didn't expect the bag to be found,” said Xu.

The story took off in the Chinese press. Soon after, the local police station received a package with a message asking the police to give it to Lu. Inside the package was a down jacket and sweater.

“I'm a poor speaker. I just wish all the good person happy, peace and health forever,” Lu said to the police when receiving the clothes.

This isn't the first time Lu has returned lost property.

According to her daughter, Lu picked up a "big and nice" smart phone while selling flowers, and she returned it to the owner after they got contact.

Lu and her daughter live in a small room of about 10 square meters. The 75-year-old chooses to sell flowers on the street everyday to earn bread.