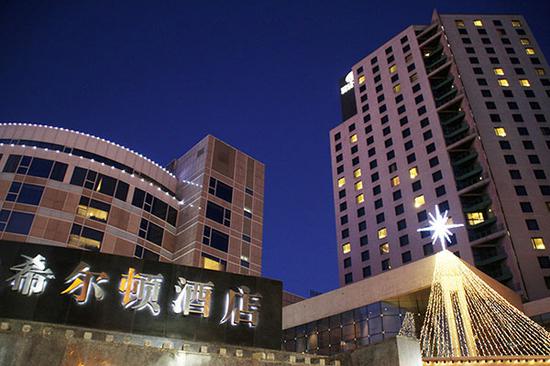 A view from the outside of Hilton Beijing. (Photo provided to China Daily)

Global hospitality giants Hilton and IHG have apologized for the actions of employees who leaked personal information about a blogger who revealed shoddy cleaning practices at 14 luxury hotels across the country.

Zhou Zhaocheng, the blogger's lawyer, said in a written response to China Daily on Monday that by working with police, regulators of the hospitality industry and department of commerce and industry, he and his client are now trying to pinpoint the source of the leak, and they reserve the right to sue the two groups.

Wu Dong, a blogger known online as Hua Zong Diu Le Jin Gu Bang, posted information about the leak on his social media account on Friday, two days after he exposed the hotels.

In a screenshot from a WeChat group shared by Wu, an alleged employee of Hilton Garden Inn Guiyang sent a picture of Wu's passport information page to the group and warned everyone to alert each other if the passport holder checks in at the property.

A similar screenshot including not only personal information but derogatory comments about his appearance was posted by Wu on Saturday. The screenshot is believed to be from a group chat for IHG employees.

In an email response to China Daily, IHG said it had confirmed that the person who sent the passport photo to the group chat is an employee. The employee has submitted a written apology to Wu and will cooperate with an investigation, it said.

The Nov 14 posting of the video exposing the shoddy and unhygienic cleaning practices at the luxury hotels coincided with the opening of one of IHG's most anticipated properties in China, a hotel built in a former quarry in Shanghai, which took a decade to design and build.

Hilton Group did not respond to questions sent by China Daily regarding the leak of Wu's information. Its Guiyang property has posted an apology letter on its social media account.

Zhou, the attorney, said no response had been received from Hilton, but he received the apology letter from IHG in person.

"The precondition of accepting the apologies is that they help us to find out the source of the leak," he said.

In an interview with Guangzhou Daily on Sunday, Wu said the hotels in his video should "solve the problem instead of solve me".

The 11-minute video by Wu recorded housekeepers from Hilton's Conrad Beijing and Waldorf Astoria Shanghai, and another 12 properties, cleaning glasses with soiled towels or the same cloth that had been used to wipe toilet seats. None of IHG's properties were mentioned in the video.

The video was viewed more than 35.6 million times within five days of its release and sparked heated discussion about the value of luxury hotels in China, one of the world's fastest-growing hospitality markets.