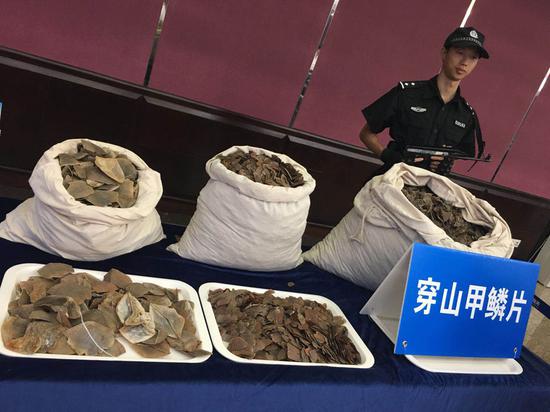 Customs officers in Guangzhou, Guangdong Province, have seized 7.26 metric tons of pangolin scales after cracking down on a series of smuggling cases involving endangered animals and their products in July and August.

"The crackdown has dealt a heavy blow to the smuggling that involves endangered animals and their products in Guangdong province, known as the southern gate of the country," Zheng said at a news conference on Wednesday.

"The large amount of pangolin scales smuggled from Africa indicated between 12,000 and 18,000 pangolins had been slaughtered, as a pangolin usually has from 0.4 to 0.6 kilograms of scales," he said.

A special task force was established to focus on investigating the case when customs officers seized a total of 2,260 kilograms of pangolin scales at a customs checkpoint in Yunfu, Guangdong, on July 11.

The smuggled pangolin scales, in 113 white woven bags, were found in a container that was declared at customs to be granite.

After weeks of investigation, customs officers seized another 2.6 tons and 2.3 tons of pangolin scales in two special operations in Guangzhou in August. All the smuggled pangolin scales were declared at customs to be granite.

According to Liang Jinkun, a senior officer at Zhaoqing Customs, which is administered by Guangzhou Customs, four suspects - surnamed Liang, Liu, Wu and Du - have been detained for further investigation. The suspects, who come from the Guangdong cities of Yunfu, Foshan and Shantou, are in their 30s and 40s.

"Last year, Liu asked Liang, who once worked in Africa, to purchase pangolin scales there and smuggle them back to the mainland for a big profit," Liang Jinkun, the officer, said.

The price of pangolin scales was about 340 yuan ($50) a kilogram in Africa while they could be sold for about 5,600 yuan a kilogram in the black market in Guangdong, he added.

Pangolin meat is regarded as highly nutritious, while its scales are used in traditional Chinese medicine to help cure rheumatism, carbuncles and mastitis - as well as for detoxification.

"All the smuggled pangolin scales will be destroyed. Any trading of pangolin scales or other products of endangered animals is banned on the Chinese mainland," Liang Jinkun said.

Pangolins are now under strict State protection, he said.

Official statistics from Guangzhou Customs list nine smuggling cases involving endangered animals and their parts and products that were busted since the beginning of the year.

In addition to the large amount of pangolin scales, customs officers seized 67.5 kilograms of boa skins, a large number of ivory products, seven live lizards and a live tortoise.