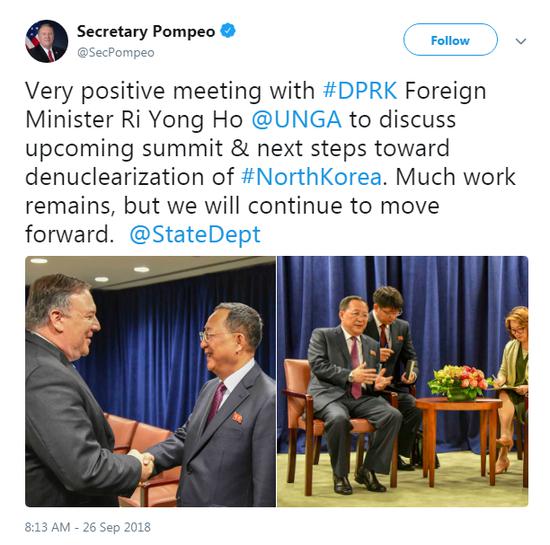 U.S. Secretary of State Mike Pompeo will visit the Democratic People's Republic of Korea (DPRK) next month to discuss its denuclearization efforts ahead of a planned second summit between its leader Kim Jong Un and U.S. President Donald Trump, the U.S. Department of State said on Wednesday.

Pompeo said on Twitter that the meeting with Ri was "very positive" and the U.S. and DPRK are moving forward on denuclearization.

The two diplomats discussed the "upcoming summit & next steps toward denuclearization of North Korea [DPRK]. Much work remains, but we will continue to move forward," he tweeted.

Earlier on Wednesday, Pompeo told U.S. media the next meeting between Trump and Kim is likely to take place after October.

"We're working diligently to make sure we get the conditions right so that we can accomplish as much as possible during the summit. But we hope it will be soon," Pompeo told CBS in an interview.

"It may happen in October, but more likely sometime after that."

On the same day, Trump also told reporters that the timing and location of his next meeting with Kim would be announced in the "very near future."

Asked what the DPRK had to do before his next meeting with Kim, Trump said, the two had made "a tremendous amount of progress" since last year. "They're denuclearizing North Korea [DPRK]. We have a wonderful relationship going between our country and them," he said.

On Tuesday, Republic of Korea (ROK) President Moon Jae-in confirmed that Kim was hoping to meet with Trump and said the second U.S.-DPRK summit could take place before the end of this year but likely in a different place.

Moon told Fox News that Kim had told him during last week's summit that the "corresponding measures" he was seeking were security guarantees Trump pledged in Singapore and moves toward normalization of relations with Washington.

"I believe that setting a timetable for all these measures is a task for the second U.S.-North Korea [DPRK] summit," Moon said.