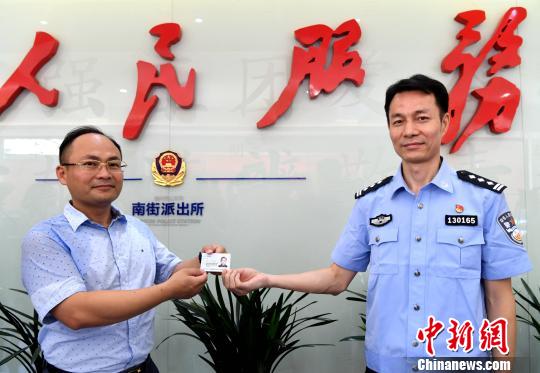 More than 22,000 Taiwan residents had applied for mainland residence permits 10 days after applications opened on Sept 1, An Fengshan, spokesman for the Taiwan Affairs Office of the State Council, said at a news conference on Wednesday.

"Taiwan residents from all sectors, including businessmen, young entrepreneurs, teachers and students, have been very enthusiastic in applying, which demonstrates the popularity and benefits of the new residence card," he said.

The new card won't replace or affect a valid travel permit issued by the Ministry of Public Security for Taiwan residents to enter or leave the mainland.

All public services and conveniences provided by the card remain available in every mainland city after a departure and subsequent return, he said, adding that a person's tax status will be unaffected.

"The card doesn't involve any change in political rights or obligations. Applicants do not need to have mainland household registration or forsake their Taiwan residency. The application is entirely voluntary and has no special requirements."

Applications for the mainland residence card started on Sept. 1 to give residents of Hong Kong, Macao and Taiwan greater convenience and easier access to public services.

Those who have stable jobs and accommodations, or who are attending school or otherwise living on the Chinese mainland for longer than six months are eligible to apply.

Card holders are entitled to basic public services, including education, medical services, legal aid, social insurance and local housing funding, and will have more convenience in transportation and financial activities on the mainland.

An said it's important to provide equal treatment and opportunities for Taiwan compatriots as mainland residents have, solving the practical problems that have troubled them for years.

Applicants need to submit certain information, such as address or employment documents, as well as mainland travel permit cards and biometric data, to local public security bureaus and should receive their new resident card in about 20 working days.

An said the collection of data allows for greater convenience in the use of public services and can prevent scams or embezzlement. The chip used in the card uses advanced technology and can effectively protect personal data from being leaked or stolen.

He also said that the Chinese mainland and Taiwan have seen closer and more frequent exchanges since the release in February of 31 measures to promote cross-Straits economic and cultural exchanges and cooperation.

Many job-hunting websites also offer services tailored to Taiwan residents so they can enjoy the same recruitment opportunities as their mainland counterparts.