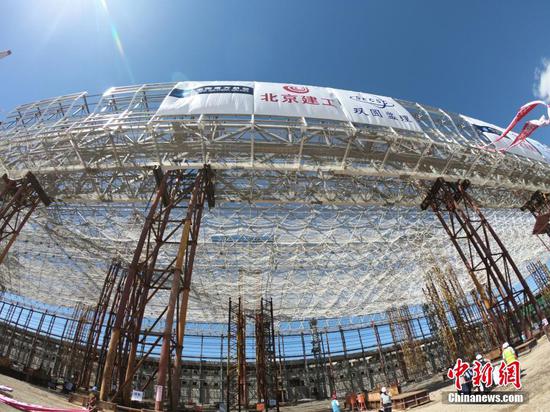 As the last roof structure was lifted in place Monday morning, the aircraft hangar in Beijing Daxing International Airport, an international hub, was capped after around four months of operation. The hangar has a longer span than any structure of its kind.

Weighing 7,200 tons, the 404.5-meter-long and 97.5-meter-wide roof truss was mostly pre-assembled on the ground and then elevated to a height of 38.5 meters after three rounds of roof raisings. The first two took place on Aug 18 and Aug 31.

Sitting beside the runway, the hangar cannot be built too high due to safety concerns during take-off and landing. Therefore, the W-truss was adopted for building the hangar's roof, helping to lower the roof height.

The structure also brought the benefit of saving steel consumption. "At least 100 million tons of steel would be used if the roof were not built with a W-truss structure. But we only used 7,200 tons of steel, maybe the lowest amount in building equal-sized hangars," said Hong Biao, a project manager from Beijing Construction Engineering Group involved in the construction.

Weighing 600 tons in total, tubes for draining water and fire protection and electric wires have been uplifted alongside the roof, sparing the trouble of aerial work and shortening the construction period.

Covering an area of 390,000 square meters, or about the size of five football fields, the long-span hangar can hold a maximum of 12 aircraft, including two A380 jumbos, three Boeing 777 wide-body aircraft and seven narrow-bodies.

When completed, the facility will set new Asian and world records. It will be the biggest maintenance hangar in Asia and also the biggest single building of its kind in the world.

The facility is one of several construction projects planned by China Southern Airlines for its new hub in Beijing Daxing International Airport, which will take pressure off Beijing Capital International Airport in the northeastern suburbs. The new airport is expected to start trial operations in October 2019.