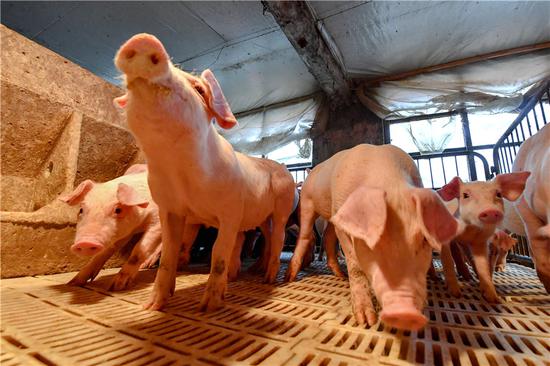 Piglets are held in pens at a modern pig farm in Beijing on April 30. (Photo by Wu Bo/For China Daily)

Additional outbreaks of African swine fever are likely to occur in China, despite nationwide disease control and prevention efforts following four outbreaks this month, the Ministry of Agriculture and Rural Affairs said on Wednesday.

The ministry said an investigation is underway to locate areas affected by the infectious disease, and uncertainties remain regarding its development.

Swine fever, deadly to pigs but not harmful to humans, should not be confused with the swine flu virus, which can infect humans, experts said.

China faces high risks that African swine fever will be introduced into China again, as the disease has been circulating in neighboring countries for a long time, the ministry said. But it didn't specify where.

China has reported four African swine fever outbreaks this month－the first recorded outbreak was reported on Aug 1 in Shenyang, Liaoning province. More than 500 pigs in four provinces died from the disease. All four outbreaks are under control, the ministry said.

Since the outbreaks, the ministry has taken many disease control and prevention measures, including guiding local authorities to use quarantines and sterilize pens and equipment. It has cooperated with public security departments to trace its origin.

The ministry has ordered agricultural authorities across China to conduct monitoring and inspections covering pig raising, trade and slaughter to eliminate risks of disease's spread.

Customs authorities across China also intensified inspections of goods from countries with African swine fever outbreaks. Beijing Customs stepped up inspections on 40 flights bound for China from 12 countries, it said.

China is the world's largest producer and consumer of pork. A statement released on Tuesday by the Food and Agriculture Organization of the United Nations said Chinese authorities have culled more than 24,000 pigs in the four provinces where outbreaks occurred in efforts to control spread of the disease.

The strain detected in China is similar to one that infected pigs in eastern Russia last year, but there is no conclusive evidence of the outbreak's source, it said.

"The movement of pig products can spread disease quickly and, as in these recent cases, it's likely that the virus was spread to other parts of China by the movement of such products, rather than live pigs," said Juan Lubroth, the FAO's chief veterinarian.

"Outbreaks such as this one are important reminders to us all that we must work together in a multilateral and intergovernmental effort to prevent and respond to outbreaks of animal diseases because these diseases know no borders," said Kundhavi Kadiresan, FAO assistant director-general.

There is no effective vaccine to protect swine from the disease. Outbreaks can be devastating. The most virulent forms are 100 percent lethal for infected animals. All infected pigs and pigs in the vicinity need to be destroyed once an outbreak occurs, according to the Ministry of Agriculture and Rural Affairs.

African swine fever was first discovered in Kenya in 1921 and spread beyond the continent in 1957, the ministry said. This year, 2,710 outbreaks have been reported in 11 central and eastern European countries, it said.