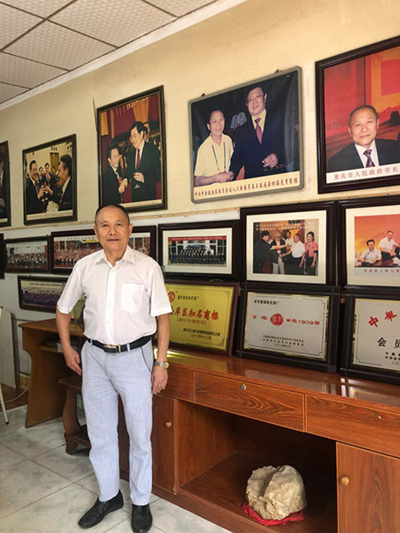 A Chongqing senior man who has been supporting the army for decades has decided to leave all his wealth and possessions not to his children but to army and public welfare undertakings.

"Thanks to soldiers defending the country, we can live and work in peace," said Jia Ziyan, 75, a local in Nanan district of Southwest China's Chongqing municipality, on Tuesday.

Jia, who runs a pig farm and a distillery, launched activities supporting the army in 1989, and preliminary figures showed that he had donated over 6 million yuan ($876,900) in past 29 years.

Jia said he decided to support the army after watching the film Heroic Sons and Daughters, a 1964 movie that shows stories of Chinese soldiers in the 1950-53 Korean War.

"I respect the brave and fearless spirits of soldiers," he said.

From 1989, Jia would bring fruits and pigs from his farm to the troops stationed in Nanan district on the Army Day and Spring Festival every year, and he also arranged some art troupes to perform for soldiers.

In 1994, Jia sold his family's old house to establish a special fund for awarding servicemen originating from Nanan district who gained military merits. In 2013, the fund extended to the servicemen who serve in Nanan district. The fund has so far awarded 421 servicemen about 1.26 million yuan.

In 2016, Jia was honored with the title of national model in supporting the army.

He said he had told his offspring that they will not inherit any money as money will only make them indulge in a life of pleasure and comfort. He expected them to inherit the tradition of supporting the army.

Jia's daughter Jia Yujing also joined in activities supporting the army, and son-in-law has even served in the army for eight years.