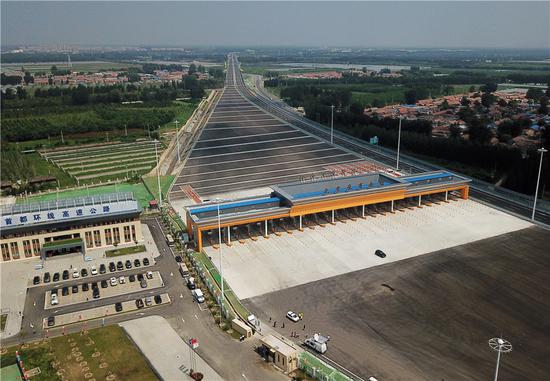 A 38-kilometer section of highway that connects Beijing's southern Daxing district with eastern Tongzhou district opened to vehicles on Monday at noon, bringing the larger 940-km project into full operation.

The section will ease Beijing's traffic burden and boost the economy in the wider Beijing-Tianjin-Hebei province region by shortening travel time, according to Beijing Capital Ring Expressway Co, which is in charge of the management of the 38-km section.

"Travel between Dachang and Langfang, Hebei, took an hour and 20 minutes because drivers had to detour to the 6th Ring Road in the capital. However, it now takes only 40 minutes via the newly built expressway," said Jing Yanhui, deputy general manager of the company.

Vehicles from northeastern provinces once had to use the 6th Ring, but now the diversion of traffic is relieving the stress, according to a company statement.

"By Tuesday midnight, more than 7,000 vehicles had passed through the Daxing-Tongzhou section in 12 hours. Volume nearly reached the 16,000 per day level that we estimated before," he said.

As for the Capital Region Ring Expressway - also known as the 7th Ring Road and G95 Highway - the Hebei Highway Traffic Police Department estimated there would be 25,000 vehicles every day passing through at 120 km per hour.

The 7th Ring Road links 13 major places around Beijing, including Zhangjiakou, Chengde and Langfang. Unlike the other ring roads, which are all inside the capital, the 7th ring is about 1,000 km, with more than 800 km in Hebei province, according to Hebei traffic police.

"By improving the connections between major cities in the transportation network, the 7th ring road is expected to enhance the integration of the Beijing-Tianjin-Hebei area and form a prosperous urban circle," Jing said.