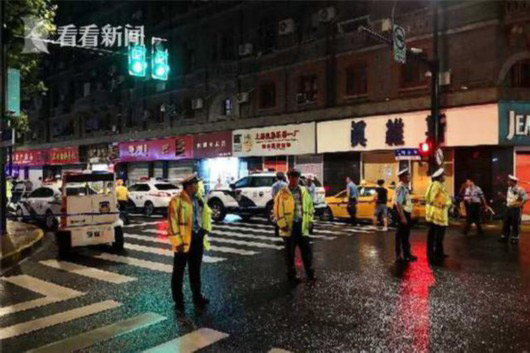 A screen shot from kankanews.com shows police cordoning off the area following the accident. (Photo provided to chinadaily.com.cn)

The city's work safety watchdog said on Monday that it is investigating the case of a falling signboard of a shop on East Nanjing Road that killed three and injured six on Sunday night.

There is speculation that the accident was caused by the strong winds brought by Typhoon Yagi, though the footage from a surveillance camera showed that it was not raining nor especially windy when the accident happened.

Yagi, the third typhoon that hit Shanghai in a month, made a landfall at Wenling in the neighboring Zhejiang province at 23:35 pm on Sunday.

By 9 am on Monday, Shanghai had cleared its blue alert – the fourth level of China's four-tier color-coded warning system – for heavy rains and thunderstorms.