Who are Gen Z?

Although the definition of generation "Z" remains ambiguous, Barclays believes that it can be defined as people born between 1995 and 2009 (current ages 9 to 23).

Generation Z is the most populous cohort ever, accounting for 25 percent of the world's population today.

In China, though most of generation Z are still on campus, their inherent independent autonomy and decision-making ability, together with unprecedented multidimensional thinking ability, make them different.

Shaped by the Internet

China was connected to the Internet in 1994, in time for the Z generation to become the first Internet kids in the country. Their social behaviors have been shaped by the Internet.

A survey made by Wavemaker (previously MEC) in 2017 shows that generation Z is not as obsessed with first-tier city dreams as the previous Y generation.

Having a relatively mature view of career, they prefer to consult experienced people and not to deviate from reality. Besides, they are more cautious about social media.

They are not reluctant to express themselves but are more willing to selectively do so in a preferable circle.

Generation Z in China takes the initiative in choosing their interests and ideals as they pay more attention to their right to "choose the one I love." 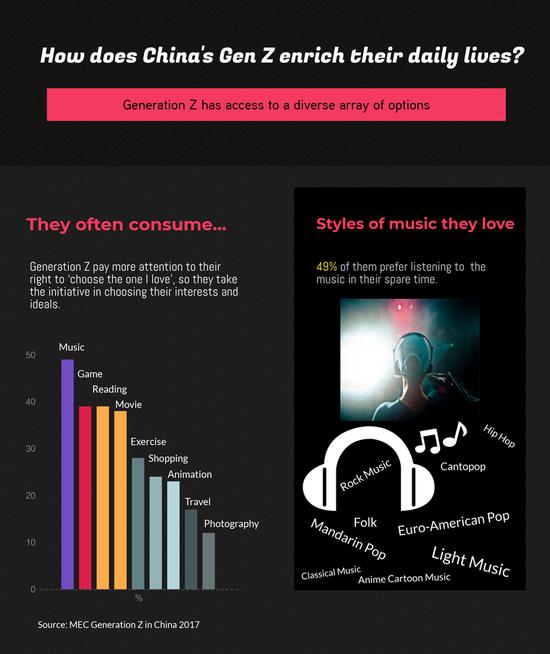 Though their energy and attention is still mostly around their studies, they have access to a diverse array of options in entertainment.

The future is Gen Z

The children of this generation tend to be reported as bold and capricious, yet they are also recognized as a bunch of kids who are in fact, more socially responsible than those born before them, according to a survey from the Ministry of Education in China that interviewed more than 7,000 young people born after 1995.

Born tech-savvy and Internet-savvy, generation Z is more responsible for what they say and do online than people born during the 1980s.

Though we are still at a time when millennials (Generation Y, born 1980-1995) are still a key demographic, it is easy to believe that generation Z will bring the society more and more surprises.