Experts being sent out to ensure vaccine safety 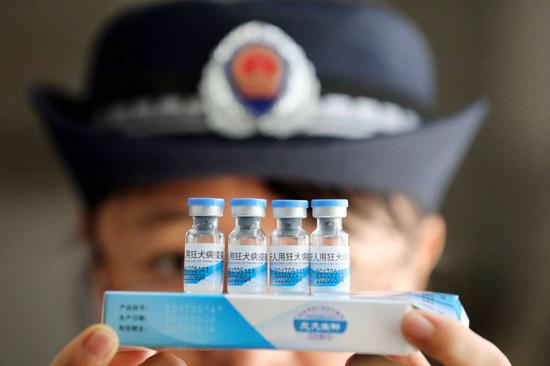 A law enforcement officer inspects vaccines at the Center for Disease Control and Prevention in Rong'an county of Liuzhou city in the Guangxi Zhuang autonomous region. (Photo by Tan Kaixing/China Daily)

China's top health authority has begun sending out supervisory teams across the country to ensure that people who may have received substandard rabies vaccines have access to remedial services.

On Tuesday, the National Health Commission began dispatching teams consisting of officials, public health experts and doctors to all provinces, autonomous regions and municipalities to supervise local authorities in carrying out services for those who have received rabies vaccinations provided by Changchun Changsheng Bio-tech Co.

Local authorities will also provide new rabies vaccinations with products made by other companies, and offer follow-up and consultation services, the commission said in a circular released to all provincial health authorities, and made public on Tuesday night.

The company, based in Changchun, Jilin province, is a major vaccine producer in China and has been entangled in public criticism since July 15, when the State Drug Administration announced it found the company to be engaged in falsifying production and inspection records in the making of rabies vaccines.

An investigation team sent by the central government revealed on Monday that the company has been engaged in various serious violations since April 2014. They included adulteration of expired vaccines as well as tampering with production dates and batch codes so products could still be used after their expiration dates.

The company has been ordered to suspend production, and authorities are recalling its rabies vaccines sold in China and overseas. Top officials have vowed harsh punishment for all responsible, including officials who failed to fulfill their duties.

In the joint circular released by the health commission and the drug administration on Tuesday night, health authorities across China will provide remedial services to all people who have received vaccinations with rabies vaccines produced by the Changchun company.

Among this group, those who have not completed the entire series of injections can continue to receive qualified rabies vaccines produced by other companies for free, according to the circular.

Those who have completed the entire procedure can get rabies vaccinations again for free if they so choose, the circular said.

Rabies normally begins showing symptoms in humans between one to three months after infection, the commission said, citing figures from the World Health Organization.

To ensure the health of those who have received the rabies vaccines made by the company within the past year, local authorities will provide follow-up services for them including consultation.

Typically, an individual should receive five doses of a rabies vaccine for a complete procedure within 28 days to be afforded maximum protection, said Zheng Dongyi, a physician at First Hospital of Tsinghua University.

In a separate case, the government of Shangluo, Shaanxi province, apologized to the public on Tuesday for mismanagement in vaccination services by three clinics in the city, which resulted in panic among some parents.

The city is investigating those responsible, he said.