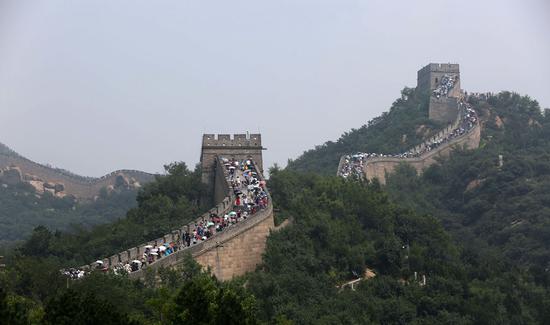 U.S. home-sharing platform Airbnb has suspended a plan to provide lodging on the Badaling Great Wall in Beijing amid concerns that it could damage the ancient structure.

The company said on Tuesday that it will not move forward with the original plan out of respect for public opinion, though the event－known as Night at the Great Wall－had been given a nod by relevant parties.

The company said it does not want to distract from the goal of enhancing "human connections", but didn't say if the event will be held somewhere else nearby.

But the cultural commission in Beijing's Yanqing district－which oversees the Badaling Great Wall－released a statement on Monday saying it was not aware of the event and no approval had been given.

The commission said it does not support such activities as they don't help conserve cultural heritage. It cited several laws and rules on the protection of cultural relics.

The event caused an uproar after Chinese netizens voiced concerns about potential damage to the ancient military fortification.

The company first revealed the event on its website on Thursday. It offered overnight lodging in September for one Airbnb user and a companion in a "room" transformed from a torch tower on the Badaling Great Wall. The room would be equipped with a bathroom, the company said.

The company has held similar activities in a number of countries, including on a reef in the Great Barrier Reef in Australia, and the Dracula Castle in Romania.