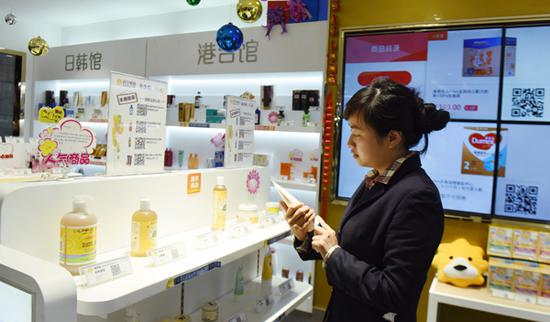 A customer selects imported items at a cross-border e-commerce experience store in Hangzhou. (Photo by Long Wei / for China Daily)

The State Council issued a statement on Tuesday approving the establishment of cross-border e-commerce comprehensive pilot zones in 22 nationwide cities.

So far, the number of China's comprehensive cross-border e-commerce pilot zones has increased to 35 from 13, covering major first- and second-tier cities.

The transaction volume of cross-border e-commerce comprehensive pilot zones has doubled for the second straight year, said an official from the Department of Foreign Trade under the Ministry of Commerce.

It has become a new highlight of China's foreign trade innovation and development, a new engine of economic transformation and upgrading, a new platform for innovation and entrepreneurship, as well as a new carrier to serve the construction of the Belt and Road Initiative, the official added.

In March 2015, the State Council released a document approving the establishment of the first pilot zone in Hangzhou, Zhejiang province. Since then, 12 pilot zones were set up in Tianjin, Shanghai, Chongqing, Hefei, Zhengzhou, Guangzhou, Chengdu, Dalian, Ningbo, Qingdao, Shenzhen and Suzhou to provide more support for export development.

Compared with the initial 13 cities, the 22 newly added ones have expanded the range of pilot zones to China’s central, western and northeastern regions. Shenyang, Changchun and Harbin make up the northeastern cities, while the central and western cities account for nearly half the total.

The potential is huge for the underdeveloped central and western regions, to where China's industries are rapidly shifting, Zhu added.

China's cross-border e-commerce trade (including retail and B2B) reached 7.6 trillion yuan ($1.12 trillion) last year, according to iiMedia Research, a market consultancy. It has estimated the figure will hit 9 trillion yuan this year.