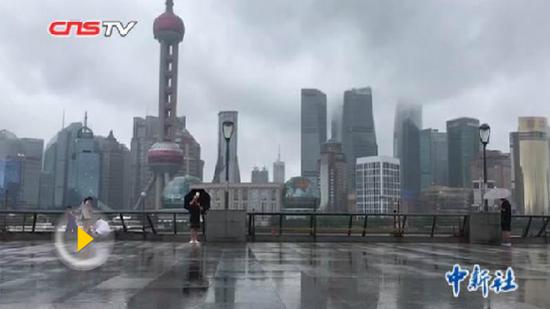 Jongdari, the 12th typhoon this year, makes landfall in coastal Jinshan District in southwest Shanghai at around 10:30 a.m., Aug. 3, 2018. (Photo/Screenshot on CNS TV)

Jongdari, the 12th typhoon this year, made landfall in coastal Jinshan District in southwest Shanghai at around 10:30 a.m. Friday, packing winds of up to 23 meters per second near its eye, according to the National Meteorological Center.

The typhoon continues to move northwestward but is waning in strength, the center said.

Bringing gales and downpours, Jongdari downed more than 500 trees and caused temporary waterlogging and a power blackout for some 800 households, according to the city's flood control headquarters.

The situation has been handled in a timely manner and the rain has weakened, the headquarters said.

It also said 151,400 people had been relocated, over 145 flights and 119 high-speed train trips canceled, and some beaches closed.

In the neighboring province of Zhejiang, more than 19,820 residents in seven cities were relocated. More than 24,000 ships, including 20,417 fishing boats, have returned to port.

On July 22, Ampil, the 10th typhoon this year, made landfall on the island of Chongming in Shanghai.