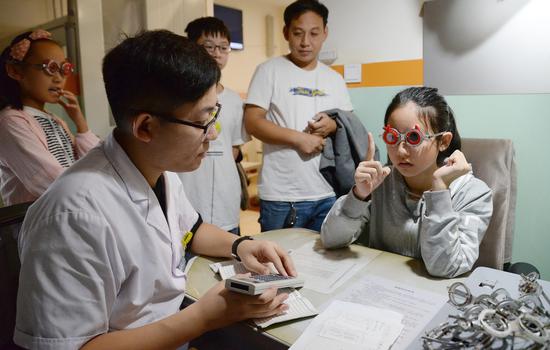 A primary school student gets a vision test in Handan, Hebei Province, during the summer holiday. Summer, especially the days before school resumes, is a peak season for such tests. (Hao Qunying/For China Daily)

Yu Ting'an was 5 years old when she started wearing glasses for nearsightedness, or myopia.

"We didn't pay much attention because we thought she just wanted to concentrate on the details of games she plays on the phone," said her mother, Xie Jun, from Changsha, Hunan Province.

"It's just an aesthetic issue. She will have to get used to the glasses," she added. "Many people even wear them without the lenses just for fun, so I don't think there is anything to worry about."

However, myopia has grown to such worrisome proportions in China that the Ministry of Education and the National Health Commission issued a draft guideline on Thursday laying out comprehensive measures to curb the problem among schoolchildren.

Prevention and control of myopia will be used to evaluate local government performance, it said, adding that schools and local governments with worsening student eyesight for three consecutive years will be held accountable, it said.

Parents and schools should work together to ensure at least one hour of outdoor activity every day, enough sleep, reduced academic workload and less time spent on electronic devices for students, the guideline said.

According to a research report released by the World Health Organization last year, the myopia rate among Chinese juveniles is the highest in the world at 70 percent for high school and college students and nearly 40 percent for primary school students.

The WHO report said that the number of nearsighted people in China has reached 600 million, nearly half the country's population.

Dennis Lam Shun-chiu, an eye specialist from Hong Kong, said many youngsters in China nowadays increasingly indulge in computer games and other electronic products, which has led to an increasing rate and severity of nearsightedness.

The underlying cause of nearsightedness is believed to be a combination of genetic factors - with high risk for children born in a family with a history of the condition - and environmental factors, including spending long periods focusing on near objects and excessive time spent indoors, he said.

Parents and society as a whole should realize that shortsightedness is a serious threat to health, as it can lead to conditions including glaucoma, macular degeneration and retinal detachment, he advised.

Parents should guide their children to engage in more outdoor activities and control the time spent on electronic devices, he said, adding that parents and teachers should also teach students to keep a proper distance from books and screens and take regular breaks during study.