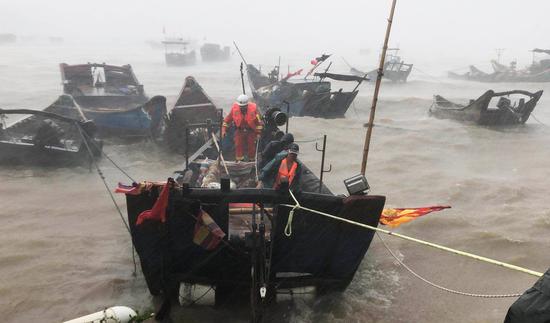 Firefighters use a boat to evacuate a stranded fisherman off Lianjiang county of Fujian Province's capital, Fuzhou, on Wednesday. (For China Daily)

A total of 580,000 people have been evacuated as typhoon Maria stormed into southeastern China on Wednesday, paralyzing railway and air transportation in some areas, authorities said.

The typhoon, the eighth in China this year, made landfall about 9 am on Wednesday in Lianjiang county, Fujian province, bringing gales of up to 151 kilometers per hour at its center. All those evacuated are from Fujian and neighboring Zhejiang province, according to the State Flood Control and Drought Relief Headquarters.

Maria is the first typhoon this year to trigger a red alert from the National Meteorological Center, the highest in China's four-tier system for severe weather.

The strong gales uprooted many trees, broke fishing boats and caused hazards on roads in Lianjiang, a fishing county. Chen Zuliang, a member of the county's flood control office, said that more than 8,000 residents had been evacuated in the county.

Fujian ordered all fishing boats to return to harbor by noon on Tuesday and workers at offshore fish farms were required to return to land by 6 pm.

The headquarters also said the typhoon brought torrential rains in the two provinces, with precipitation of up to 238 millimeters from 2 am to 1 pm. The sea level in Shacheng monitoring station in Fujian at 7:20 am on Wednesday reached 4.4 meters, the highest on record since 1956. The speed of the gale at the typhoon's center decreased to 83 k/h by 1 pm, the headquarters said.

Hundreds of trains from or going to Fujian were halted, and 178 flights have been canceled at Fuzhou Changle International Airport, according to transportation authorities.

Fujian fire authorities entered "combat readiness" mode at 8 am on Tuesday. While establishing 144 six-member rescue teams, it has also mobilized abundant rescue equipment and disaster-relief materials, including boats and life vests, according to the Ministry of Emergency Management.

The ministry also said more than 5,800 technicians with expertise in geological disaster control have been in positions to deal with resulting problems.

The typhoon was expected to enter Jiangxi province on Wednesday night as it weakened into a tropical depression.

Sichuan province was also troubled by torrential rains on Wednesday that resulted in causalities.

Three people from one family in Nianzi village in Qingchuan county, Sichuan, were found dead from a rain-induced landslide on Wednesday morning, according to Wang Wei, an information officer from the Qingchuan county government.