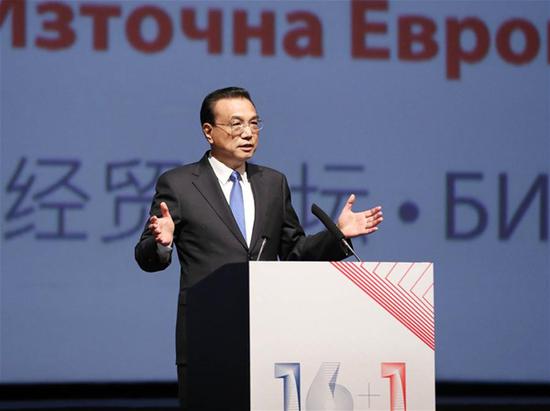 Chinese Premier Li Keqiang and his wife ended their trip to Europe Tuesday with a private dinner with German Chancellor Angela Merkel and her husband at Hugos Restaurant with a panoramic view from the top floor of InterContinental Hotel in Berlin.

The couples were pictured talking intimately by picture windows with a glass of wine in hands. At the dinner that lasted for hours, they chatted about bilateral ties, cooperation, as well as history and art.

Filled with an amicable and result-oriented air, the dinner was the epitome of the Chinese premier's six-day stay in Europe, the first since China's new cabinet was formed in March.

The trip, including official visits to Bulgaria and Germany and attending a meeting of leaders from China and the Central and Eastern European (CEE) countries, cemented consensuses on closer pragmatic cooperation and trade liberalization and outlined a blueprint for further innovation partnership.

Besides, China and Europe, the world's two major economic forces, delivered a clear and encouraging message that they will stay committed to supporting open and free trade to promote strong, sustainable and balanced global growth.

"As long as we insist on pursuing open cooperation, mutual benefits and win-win result, while staying down-to-earth with firm confidence, the 16+1 cooperation will surely be promoted steadily and will add greater contributions to China-European Union (EU) ties and the world's openness and prosperity," Li said on Saturday at the meeting between China and 16 CEE countries.

With six years of development, the fruitful achievements of 16+1 mechanism, a cross-regional cooperation platform, have exceeded expectation, as bilateral trade volume grew to almost 70 billion U.S. dollars from 40 billion.

During Li's stay in Bulgaria, China and CEE countries jointly issued a guideline for their cooperation, and the leaders witnessed the signing of more than 20 cooperation documents.

Addressing the eighth China-CEEC business forum, Li said 16+1 cooperation is an important part of and a useful complement to China-EU cooperation, and it not only facilitates the development of the two sides, but also helps narrow the gaps within the EU and advance European integration.

In Germany, the two countries agreed to promote bilateral cooperation in economy, trade and investment, agriculture and people-to-people exchanges.

Germany and China enjoy close and extensive cooperation, said German Chancellor Angela Merkel, who co-chaired the fifth around of inter-governmental consultations with Li on Monday. She noted that more than 70 dialogue mechanisms between the two countries fully indicate the depth and breadth of bilateral cooperation.

This round of inter-governmental consultations is the first of its kind since the two countries' new cabinets took office in March, said the Chinese premier, adding that it is of great importance to promote and make plan for the all-round cooperation between China and Germany.

During both stops, Li and his counterparts witnessed the signing of scores of cooperation documents in areas such as agriculture, education, finance, trading, telecommunications and the automobile industry.

Faced with the accumulating clouds of protectionism, both CEE countries and Germany, the EU's most industrialized and populous country, reiterated their shared commitment to opposing trade barriers and to building an open world economy.

Throughout his trip in Europe, Li repeatedly underlined China's resolve to preserve free trade and the multilateral trade regime, which serve as important drivers of world economic growth.

Li stressed that there are no winners in a trade dispute.

China will continuously expand its opening up so as to better cope with unilateralism and protectionism, the premier said, adding that his country will diversify its market with fair, open and transparent competition.

A trade war will strike all the countries and be harmful to their interests, Merkel said at an economic and technological cooperation forum, adding that Germany is willing to work together with China to voice support for free trade.

Commenting on the Chinese premier's call for opposing protectionism, Latchezar Dinev, chairman of the Bulgaria-China Chamber of Commerce and Industry, said countries should remember the lesson from the Great Depression in the 1930s, which arose from protectionist tariffs.

He stressed that trade relations between countries take years to build, but only months to break. "If their relations or supply chains are broken, it is very difficult to recover them," he said.

Joined by Merkel, Li attended on Tuesday an autopilot exhibition between the two countries, an event that indicates stronger bilateral cooperation in the innovation industry.

Since the two countries adopted a joint action plan known as "shaping innovation together" in 2014, they have been advancing ties in such areas as molecular medicine, green and lightweight mobility and intelligent manufacturing.

German automobile manufacturers have been cooperating with Chinese universities in such fields as autopilot, big data of traffic management as well as education on innovation and business creation.

China is pursuing a new round of opening up and will further relax market access to the automobile sector, Li said. He welcomes German companies to continue to expand investment in China, cooperate more in high-tech fields and jointly seize opportunities in market competition in the future.

In a joint statement released after their inter-governmental consultations, China and Germany agreed that cooperation in scientific research and innovation is an important pillar of bilateral cooperation, and both sides welcome more cooperation by their scientists in cutting-edge and basic research fields.

China treats both Chinese and foreign companies in its territory equally and will increase the protection of intellectual property rights, Li said.