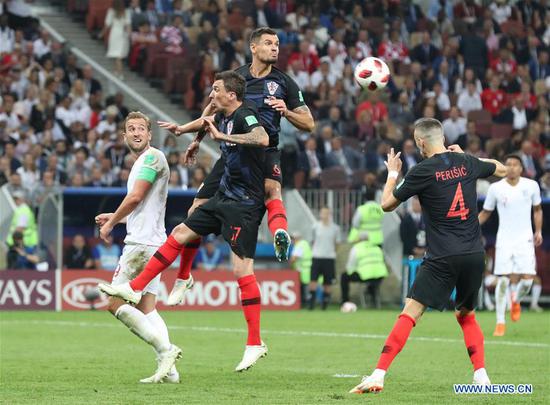 Dejan Lovren (top) of Croatia competes for a header during the 2018 FIFA World Cup semi-final match between England and Croatia in Moscow, Russia, July 11, 2018. (Xinhua/Yang Lei)

Mario Mandzukic struck a dramatic extra-time goal as Croatia clinched a place in their first World Cup final with a 2-1 victory over England on Wednesday.

The Juventus forward prompted jubilant scenes in the Croatia camp by ghosting in behind England's defence and lashing a first-time shot past goalkeeper Jordan Pickford.

England had taken an early lead courtesy of a Kieran Trippier free-kick before Ivan Perisic showed great athleticism to fire in a second-half equalizer.

Croatia will now meet France in the final on Sunday and they are already guaranteed their best ever World Cup finish, bettering their third placing in 1998.

The result marked the third consecutive match that Croatia have won either in extra time or on penalties, a feat hailed by coach Zlatko Dalic.

"What the players did today, the strength, energies levels, was incredible," Dalic said. "I wanted to make substitutions but nobody would come off. I have to tip my hat to our medical staff and doctors. Some players played with minor injuries today - ones that would rule them out of other games. Two played with half a leg. But nobody wanted to be subbed and they didn't give in. That makes me proud." 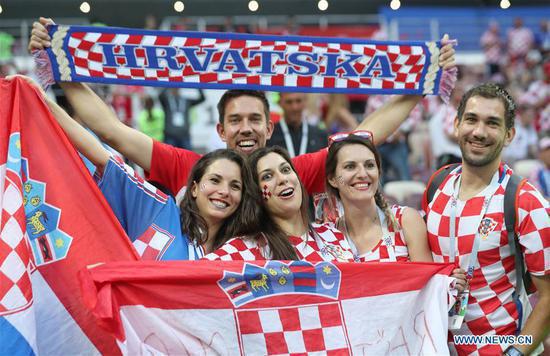 Fans of Croatia cheer prior to the 2018 FIFA World Cup semi-final match between England and Croatia in Moscow, Russia, July 11, 2018. (Xinhua/Cao Can)

England manager Gareth Southgate admitted Croatia were "stronger and more experienced" but praised his team's achievement in becoming the first England team since 1990 to reach the last four of the World Cup.

"It's impossible to say anything to the players that will make them feel better," Southgate said. "I don't think when people look at the experience of the past 18 months that people expected us to be in the semifinals of the World Cup.

"But having made it this far we thought we could win. They [the players] have to go through big match experiences to win. If you look at successful teams, some of them haven't had success the first time. You have to use experiences to your benefit and become a stronger team."

As expected, Southgate chose an unchanged lineup from the one which beat Colombia on penalties and defeated Sweden.

Croatia brought in Inter Milan midfielder Marcelo Brozovic to sit in front of the back four, with Hoffenheim attacker Andrej Kramaric relegated to the bench. The move allowed Luka Modric and Ivan Rakitic to push further forward, with Perisic and Ante Rebic providing width on the wings.

It took just five minutes for England to send their boisterous fans into wild celebrations at Luzhniki Stadium. Dele Alli was tripped by Modric on the edge of the box after clever build-up play by Jesse Lingard and Trippier curled the resultant free-kick into the top left corner of Danijel Subasic's goal.

England were posing an ever-present threat at set pieces and Harry Maguire frittered away a chance to double his side's lead by aiming a free header wide after a Trippier corner.

Croatia slowly began to work their way into the match with Modric pulling the strings in midfield and Ante Rebic providing a threat along the right flank.

They created half a chance when Ivan Perisic's shot flew wide after taking a deflection off Kyle Walker. Rebic then had a long-range attempt comfortably saved by Pickford.

But it was England who presented the greatest scoring threat. Southgate's side will have been kicking themselves for failing to capitalize on an errant Ivan Strinic pass that fell to Ryan Sterling 30 yards from goal. The Manchester City forward waited slightly too long to lay off his pass to Harry Kane, who was flagged for offside when a one-on-one with Subasic beckoned.

Kane then somehow failed to score after a clever pass by Lingard left him through on goal. The Tottenham striker's angled shot was kept out by Subasic and Kane subsequently fired the rebound against the post.

England picked up where they left off after halftime and Lingard's 25-yard drive was diverted over the bar by Domagoj Vida after neat interplay between Kane and Alli.

Dejan Lovren then kicked away a dangerous Trippier cross just before Kane could make contact with a header on the edge of the six-yard box.

The equalizer came in the 68th minute as Perisic met Sime Vrsaljko's inviting cross from the right by sticking out his left foot and firing into the bottom corner while almost taking off Walker's head in the process.

Croatia were suddenly energized. They had another gilt-edged chance three minutes later and again it was Perisic who provided the danger. The Inter Milan forward was afforded space after a failed John Stones clearance but only managed to fire his shot against the post. Marcelo Brozovic then blasted over as England's defence looked all at sea.

Southgate replaced Sterling with Marcus Rashford in the 74th minute in a bid to provide an attacking spark. But Croatia continued to press and England hearts were again sent fluttering when Mandzukic chested down a Brozovic pass from the right only to fire his shot from a tight angle straight at Pickford.

England will have been relieved to hear referee Cuneyt Cakir blow his whistle after 93 minutes and the short break seemed to work in their favor as they took the initiative early in extra time.

However Croatia had another ace up their sleeve and it should have come as little surprise that Perisic was the man who started the move that led to their winner.

England were caught napping in the 19th minute of extra time as the 29-year-old sent a looping header into the box with his back to goal. Mandzukic was first to respond, drifting behind the defence before blasting beyond Pickford.