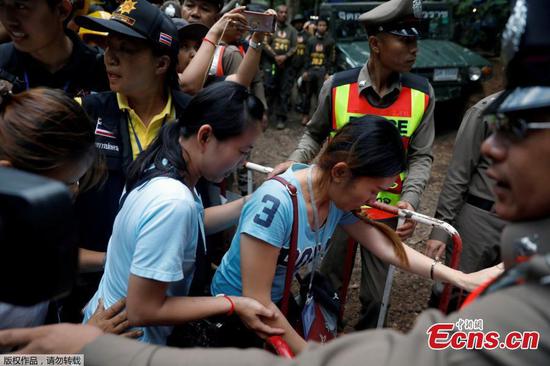 Family members are escorted by police on their way to enter the Tham Luang cave complex, as members of an under-16 soccer team and their coach have been found alive according to local media, in the northern province of Chiang Rai, Thailand, July 4, 2018. (Photo/Agencies)

A former Thai navy SEAL has died from lack of oxygen during the rescue operation to get 12 boys and their football coach out of a flooded cave, Thai authorities said on Friday.

SEAL commander Arpakorn Yookongkaew told a news briefing that the rescuer was sending air cylinders into the cave before he was found unconscious. He was then moved to Chamber three, a commander center set inside the cave, and found dead on early Friday.

He died due to lack of air when attempting to return to the command center.

The diver was identified as retired Navy Petty Officer 1st Class Saman Kunam, who joined the operation after having left his post, according to reports.

Zhou Yajun, a diver from Chinese rescue team told Xinhua that rescue teams have been ordered to slow down the operation in the cave since Thursday.

He said oxygen in the cave is getting lower and lower so rescue teams have to fill it up with oxygen.

Chiang Rai governor Narongsak Osottanakorn said the government is installing 4-km oxygen pipe as part of preparations for the group's extraction but added that the boys would not be coming out soon.

One of the officials said the condition in the cave is tough and complex. "We have to run against time to install oxygen pipe and pump the water out of the cave."

Chiang Rai is bracing for more rains on Friday.

The 13 footballers went missing in the cave since June 23. Rescue teams launched a round-the-clock search and found them on July 2.

The boys are too weak to be immediately taken out from the cave that has been inundated by floodwater. International rescue teams decided to train them with basic diving skills so they can dive and get out of the cave.