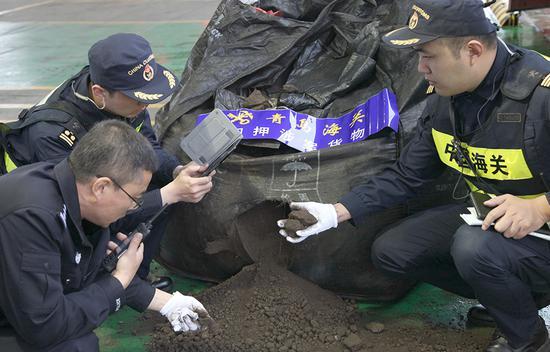 Effort against 'foreign garbage' said to be most aggressive in years

Customs authorities recently launched what they said was the most aggressive crackdown in recent years against imported solid waste, as hundreds of suspects were detained on smuggling charges.

On Tuesday, customs officers in 17 provinces and regions, including Guangdong, Zhejiang, Jiangsu, Tianjin and Shanghai - which are major centers for the processing of imported recyclables - detained 137 suspects believed to be part of 39 gangs. It was the third operation this year, the General Administration of Customs said.

More than 137,000 metric tons of what was referred to as "foreign garbage", including scrap plastic and waste mineral residue, had been seized as of 9 am on Tuesday, the authorities said.

In recent decades, China has imported recyclable waste to process and reuse as raw material in the manufacturing sector, but the phrase "foreign garbage" refers to solid waste on a list of prohibited products. The importation and processing of the material may be hazardous to human health, and the central government has prioritized its elimination.

So far this year, customs authorities nationwide have conducted three rounds of inspections, detaining 249 suspects in 81 alleged gangs accused of smuggling solid waste. A total of 217,000 tons of waste has been seized.

Customs officials at all levels should cooperate with other departments, such as environmental protection agencies, quality inspectors and those in the public security sector to carry out joint crackdowns, Mao said.

Since May, companies smuggling solid waste have been reported to the Ministry of Ecology and Environment and placed on a blacklist. The credit ratings of 20 companies have been lowered because of their importation of illegal solid waste, customs authorities said.

The General Administration of Customs also said it was important to strengthen international cooperation in law enforcement and stop smuggling at the source. The fourth international joint operation to combat solid waste smuggling began on Tuesday.

A total of 53 countries and regions, seven international organizations, including the World Customs Organization, United Nations Environment Programme and Interpol have participated in efforts to strengthen supervision and information exchange, and together crack down on the illegal cross-border transfer of solid waste.