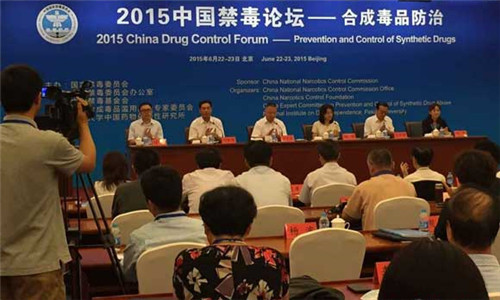 China's number of drug users grew 46,300 last year the majority of whom were using synthetic drugs, a rising trend of substance abuse in China. People under 35 years old accounted for the majority of the increase according to China National Narcotics Control Commission.

The number of people who have been detected or registered to be using synthetic drugs is 6.5 times higher than in 2008, and the number's growth rate has increased more than 40 percent year on year, said Liu Yuejin, the vice chief of China National Narcotics Control Commission, on Tuesday at the 2015 China Drug Control Forum. He added that most of these new drug addicts were users of synthetic substances.

Synthetic drugs are becoming a pressing issue in China's drug control efforts as a result of various domestic and international influences. The number of people who are known to use synthetic drugs has reached 1.459 million nationwide outnumbering people who are dependent on heroin, among other traditional narcotic drugs.

Synthetic drugs are widely associated with public safety issues such as traffic accidents, homicides, and self-mutilations among other violence against the public.