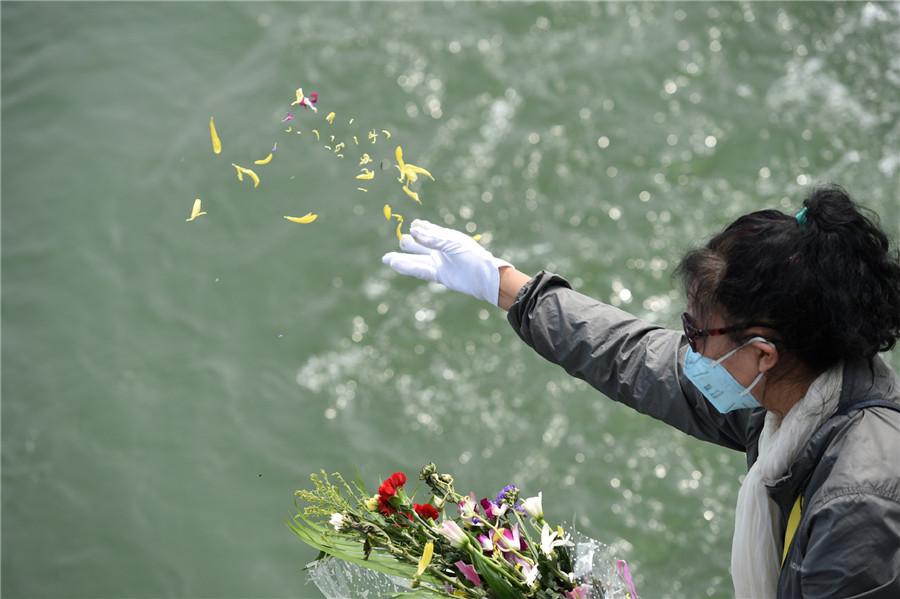 A woman scatters flowers into the sea during a sea burial held on Guobin 9 on April 2, 2018. (Photo/Xinhua)

A ship exclusively used for sea burial set off on its maiden mission in the northern port city of Tianjin on Monday.

The ship named Guobin 9, or National Guest 9, is the first one in the country that has been used for such purposes, and it will take up all sea burial services in Beijing.

The ship made two trips on the first mission, with a total crew of 380 to scatter the cremated remains of 62 into the sea.

Guobin 9 has two decks. The lower one carries 168 seats while the upper one has four booths, and it can take over 220 passengers on one mission. People with mobility difficulties can watch the burial ceremony live on televisions in the booths.

Compared with other ships previously used for sea burial, the Guobin 9 is tailored for the service. It has larger space, wider decks and more toilets, according to Wang Dedong, head of the city’s funeral services center.

“Guobin 9 sails longer than the previous ships did, so as to provide families and relatives more time to say goodbye to the deceased.,” Wang said.

Starting April 2, the ship will sail between April and October every year and carry out sea burial services two days every week, each day taking two trips.

According to the Beijing Municipal Civil Affairs Bureau, this is the 447th sea burial in the city since being put into practice in May 1994. A total of 18,906 people’s cremated remains have been scattered into the sea.