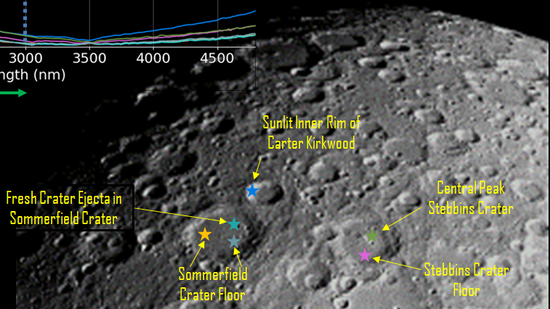 The illuminated image was acquired by the "Imaging Infrared Spectrometer (IIRS)" onboard the "Chandrayaan-2" which is designed to measure the reflected sunlight and emitted part of Moon light from the Lunar surface in narrow and contiguous spectral channels ranging from 800-5,000 nanometer.

"The IIRS uses a grating to split and disperse the reflected sunlight (and emitted component) into different spectral bands. The major objective of IIRS is to understand the origin and evolution of the Moon in a geologic context by mapping the lunar surface mineral and volatile composition using signatures in the reflected solar spectrum," said ISRO in an official statement.

The image sent by "Chandrayaan-2" shows part of the far-side of Moon in the northern hemisphere. Few prominent craters are seen in the image, added ISRO in its statement.

According to ISRO, preliminary analysis suggests that IIRS could successfully measure the variations in the reflected solar radiation that bounces off the Lunar surface from different kinds of surface types, namely, crater central peaks, crater floors, very fresh reworked ejecta associated with small craterlets within the crater floor of a large crater and also the sun-illuminated inner rims of craters.

"The variations in the spectral radiance are primarily due to the mineralogical/compositional variations that exist in the lunar surface and also due to the effect of space weathering. More detailed analysis that follows, is expected to yield important results on the heterogeneity of lunar surface composition," added the ISRO statement.

The country's second Moon Mission was launched on July 22, and its Lander "Vikram" was slated to land on the Lunar surface on September 7, but it lost contact with the ground controls while landing and has not been located yet.