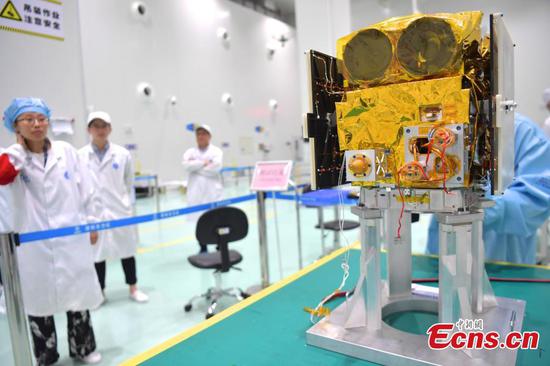 After nearly one month of in-orbit testing, the satellite is working normally and conducting full-coverage observation of the Antarctic and the Arctic every day, Cheng Xiao, the chief scientist, said at the China Symposium on Polar Science 2019.

The satellite continuously monitored a gigantic iceberg breaking away from the Amery Ice Shelf in east Antarctica in September, helping limit its impact on submerged buoys and investigation ships in the surrounding area.

The satellite will also support China's upcoming 36th Antarctic expedition by enhancing its navigation capability in the polar ice zone.

Developed by the Beijing Normal University and Shenzhen Aerospace Dongfanghong Development Ltd, the satellite weighs 16 kg and is equipped with two cameras and one receiver. It has great significance in promoting the research of polar regions and global climate change.