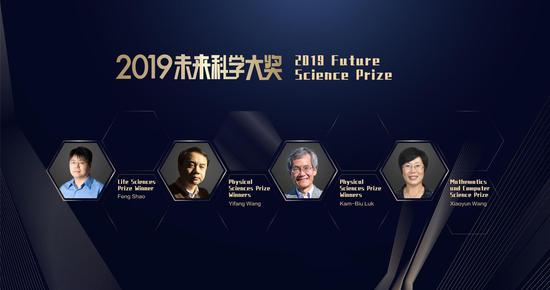 The Future Science Prize announced on Saturday that four scientists will be crowned this year for their contributions to fields in science and technology.

Shao Feng, from the National Institute of Biological Sciences, Beijing, clinched the prize in life sciences for "seminal discoveries of cytosolic LPS receptors and downstream effectors in inflammatory responses to pathogenic bacteria," according to the official website.

Wang Yifang and Kam-Biu Luk were co-awarded the prize in physical sciences as they discovered a third pattern of neutrino oscillations in experiment, opening the way for new physics beyond the Standard Model, in particular to understanding the asymmetry between matter and antimatter in the universe.

Wang hopes that this award will promote the future development of mathematics and computer science in China, especially the intersection of the two directions.

The Future Science Prize, established on January 17, 2016, is the first non-governmental science award on the Chinese mainland jointly sponsored by scientists and entrepreneurs. It sets three award categories, namely, life science, physical science, and mathematics and computer science. Each category will reward the laureate with 1 million U.S. dollars provided by four donors.

The prize focuses on original basic science research and rewards scientists who have made outstanding scientific and technological achievements in China.