A robotic fish is displayed at the 2019 World Robot Conference last month in Beijing. (Photo by SONG FAN/FOR CHINA DAILY)

Cai Yu developed his hobby into a career soon after he graduated with a doctoral degree in electronic engineering at the University of Houston in the United States in 2009.

The then 31-year-old, who once fulfilled his dream of driving across the Arizona desert in the southwest of the country, is keen on wild birds－the eagle being his favorite.

In 2013, reports of a raven-like robot created at the University of Maryland that is able to interact with real birds, drew Cai's attention and inspired him to produce animal-like robots.

Three years later, he started his own business in Nanning, the Guangxi Zhuang autonomous region, and in August last year, he began to display his new robotic eagles at technology and artificial intelligence conferences nationwide.

Cai, who experienced numerous failures, carried out thousands of experiments to make the robots fly.

"It's difficult to strike a balance between the power needed to propel these birds and the conditions in the air," he said.

"We see more and more people investing money in the research and development of various robots, but how to spend this money to ensure that they are used well remains a problem."

During the Cold War, the United States and the Soviet Union provided a significant amount of funding for research into bionics, according to Paolo Dario, a professor at the University of Pisa Sant'Anna in Italy, and also director of the Biological Robotics Institute at the university.

The term bionics was created in 1958 by Jack E. Steele, a worker at the Aeronautics Division House at Wright-Patterson Air Force Base in Dayton, Ohio, and refers to the application of biological methods and systems found in nature to the study and design of engineering systems and modern technology.

Dario said, "However, as some problems arose, the money that had been invested was later cut back," adding that research into bionic robots came to a standstill.

But scientific research in this field led to the idea that robots could not only be used for specific practical applications, but also be prepared for future research purposes, Dario said.

"For bionic robots, we need to simplify some existing processes and gain more experience from the natural environment," he said. "Inspiration from the biological world is important in producing robots." 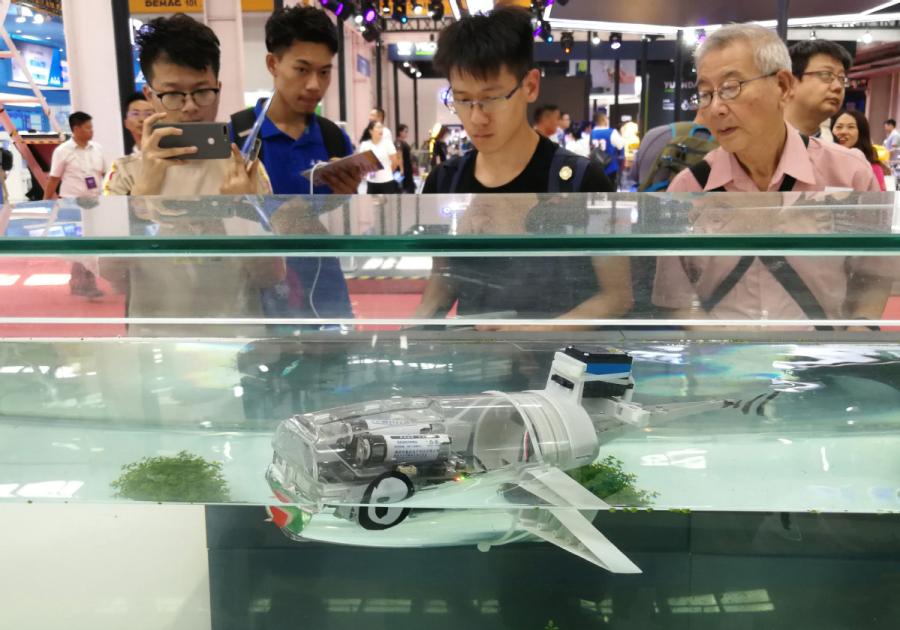 A bionic fish swims in a water tank. (Photo/CHINA DAILY)

At the World Robot Conference in Beijing's Daxing district last month, some exhibits resembled scenes from a science fiction movie.

Robots looking like jellyfish bobbed up and down in a water tank, their transparent tentacles floating on the surface.

Named AquaJellies, these robots consist of a transparent hemisphere, a central waterproof body and eight see-through tentacles. A control panel is located in the body, along with intelligent sensors and adaptive systems, to enable the robots to independently determine their movements, and to track their location.

The robotic jellyfish are designed and manufactured by Festo, a German multinational industrial control and automation company, which has produced various types of bionic robot for biological research and development.

"The biggest difficulty in the jellyfish robot is replicating the way a jellyfish moves. By doing this successfully, we can apply this to the 'grabbing' operations of other robots," Liu Fang, Festo's Chinese marketing director, said. 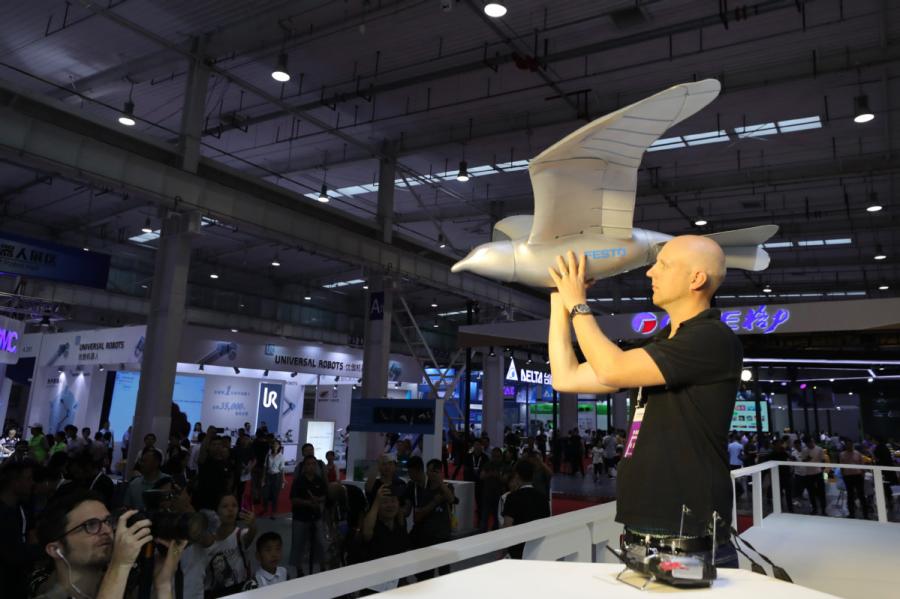 A staff member displays a robotic bird made by Festo, a German multinational automation company, at the World Robot Conference last month in Beijing. (Photo/CHINA DAILY)

"We're trying to learn from those 'animals' to get inspired and use the method in industrial automation production for further research and development. We get inspired by nature through searching for principles in biology and solutions to save energy."

The development of AquaJellies has led to widespread applications in the water sewage treatment industry.

Placing the robotic jellyfish in a rainwater storage tank enables better control of the sewage purification system and enables the water system to be protected based on various data transmitted by sensors.

"Since the robot is an independent individual itself, this means its maintenance and repairs can be carried out conveniently and quickly," Liu said. 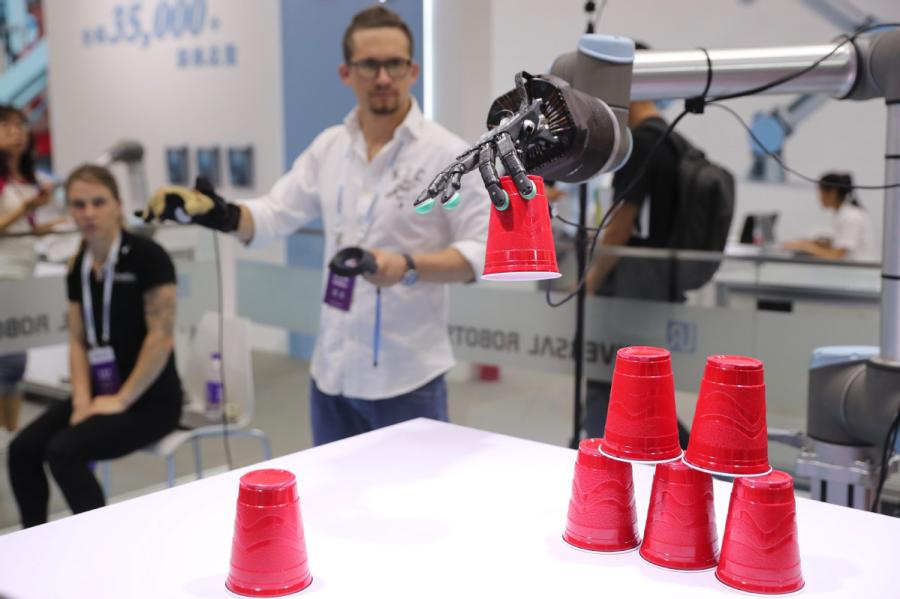 A robotic arm picks up a cup. (Photo/CHINA DAILY)

As the bionic jellyfish floated quietly at the Beijing exhibition, robotic birds flew across the hall like flashes of lightning.

The smart birds' wings are about 2 meters long and the robots weigh just 450 grams. The "birds" take off and land without any trouble, flapping their wings.

Liu, the marketing director, said the intelligent birds' shape and their lightweight carbon fiber structure means that they can fly for about 15 minutes each time.

"The birds are not available for direct sale to the public, but the method we used to design their linear and rotary motion driving technology can also be used in a hydroelectric generator," Liu said.

The birds' bodies house batteries, motors and transmission components, as well as other electronic equipment.

Their position and other information can be recorded during flight and real time data is used to ensure stability and safety when they are in the air.

Liu said the company has received many requests from toy, entertainment and drone companies to buy these robots. "We'd rather use them for education and scientific research," she said.

Festo specializes in pneumatics and industrial automation, but these robotic creatures are an interesting way to test innovative designs that may end up in more-basic industrial devices.

"For example, to make a robotic octopus we did a lot of research on the tentacles... This is something we need in automation, where steel grabs have to 'catch' products directly on a production line, then stop, before moving again in the opposite direction. Now, we have some technical solutions that are inspired by this," Liu said.

She added that the process is similar to how the car industry uses concept vehicles as test beds for ideas that could find their way onto production lines.

Some companies are also producing animal-like robots for direct use in various fields. For example, package deliveries may be going to the dogs.

A robotic dog named ANYmal, researched and developed by the Swiss Federal Institute of Technology in Zurich, can provide data such as positioning, routes and maps. It can also detect smells, sounds and heat.

An ANYmal weighs 30 kilograms and can carry up to 10 kg. It is not as agile as a real dog, but can move at a speed like human beings walk. The robot is equipped with laser radar and stereo-position cameras that can provide data that relates to navigation.

In Beijing, at the World Robot Conference exhibition center, a battery-powered ANYmal robot, with red body and a black metal basket on top of its head, ducked through a low door frame in its path, before turning carefully and climbing the front steps of a model front porch. On reaching the front door, it raised a paw to ring the doorbell and gently slid a package onto the doorstep.

These "dogbots" have been used widely in a variety of industries, such as tunneling and coal mining. Thanks to their flexible black-and-gray limbs, as well as carbon fiber and aluminum coating, they can rotate through 360 degrees and can move rapidly, both in daylight and at night. 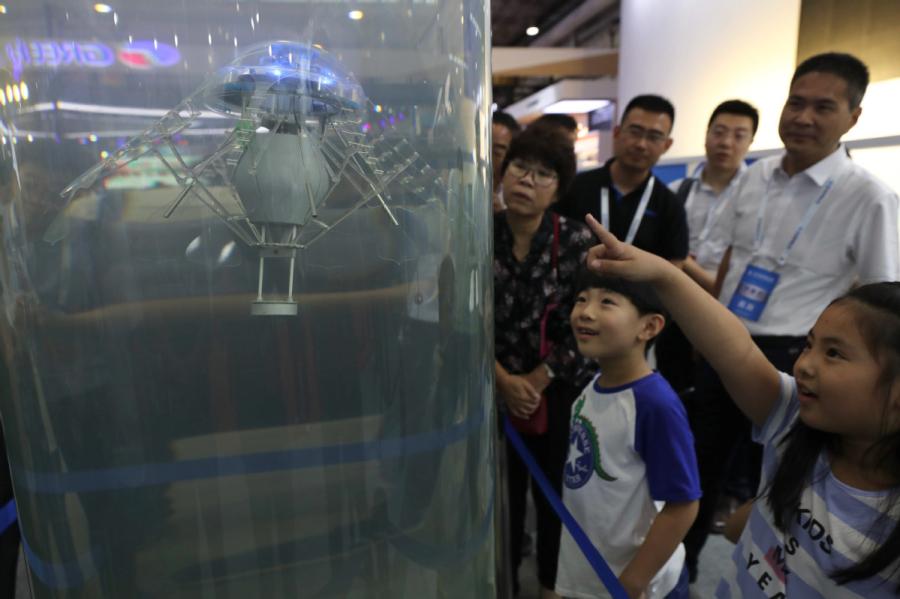 Children are amused by a robotic jellyfish. (Photo/CHINA DAILY)

The Robo-Shark can be used in several fields such as environmental protection and to test water quality. Last year, a scientific research institute used the bionic robot to collect hydrological information in specific marine areas near Qingdao, Shandong province, according to Robosea.

Several major data collections, including information about sea salinity, temperature and depth, as well as undersea noise, have also been gathered and analyzed.

Some aquariums also adopted the Robo-Shark to replace real sharks for exhibition purposes.

Fu Yuhan, chief operating officer for Robosea, said the sharks' three-joint bionic tail fins are their sole source of power, and a special sound-absorbent material is used for the coating, enabling them to operate underwater with little noise.

"This largely helps them to dive to the bottom without disturbing other marine creatures," she said."As a result, the robots can work quite smoothly."