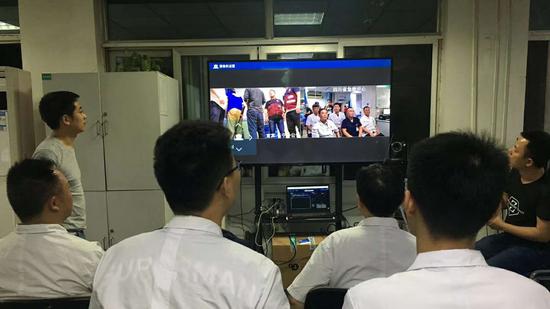 A 6.0-magnitude earthquake hit Changning County of Yibin City in southwest China's Sichuan Province in the night on June 17 and was followed by several aftershocks the next morning. At least 13 people have been confirmed dead and dozens injured, while rescue efforts are under way.

On Tuesday night, after a suspected spleen rupture, one patient at Changning County Hospital of Traditional Chinese Medicine had a 5G real-time remote video consultation with doctors at Sichuan Provincial People's Hospital with help from the front line rescue team.

Via a 5G network, doctors from Sichuan Provincial People's Hospital were able to give advice and relevant operation guidance during the real-time remote medical consultation.

This is the world's first case of applying 5G technology to disaster medical rescue.

The rescue team consists of doctors and engineers from Sichuan Provincial People's Hospital, China Mobile Sichuan Company and China Mobile (Chengdu) Industrial Research Institute. They drove the first 5G-connected ambulance in China and arrived at the Changning County Hospital of TCM in the epicenter on Tuesday afternoon to help the doctors there with joint rescue efforts.

According to Sichuan Provincial People's Hospital, the 5G emergency rescue system applied in the earthquake rescue is based on a 5G-connected ambulance and integrated with AI, AR, VR and drone applications.

On the ambulance, a series of tests can be conducted such as blood test, electrocardiogram, and medical ultrasound. While the 5G network can accelerate the transmission speed of medical images, patient signs and medical records to the hospital in real time.

This will save a lot of time for preoperative preparation, greatly shortening the gap between pre-hospital care and in-hospital treatment, and win over more time for the patients.