Sewing up Miao livelihoods is aim of American couple(1/16) 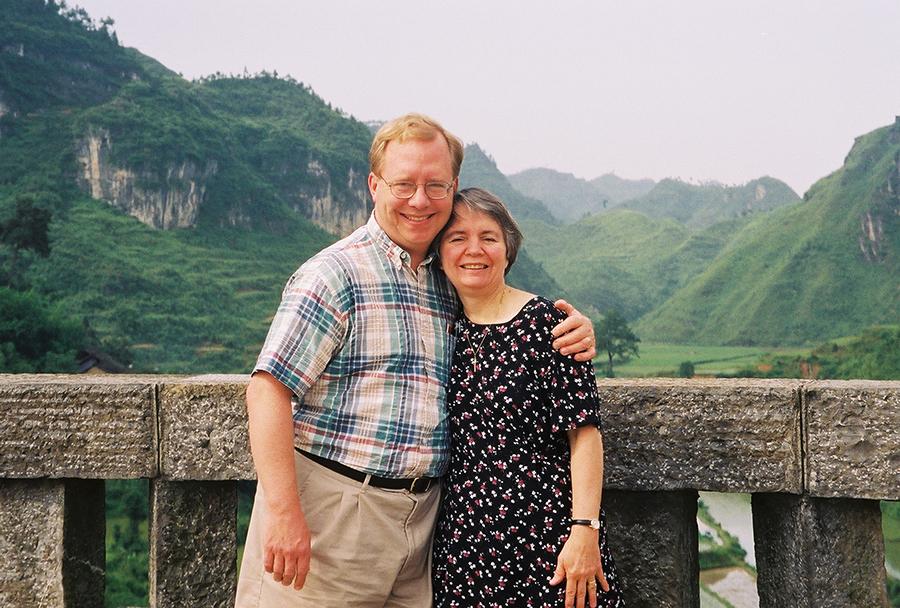 Paul and Dorothy on road to Laershan in 2002. (Photo provided to chinadaily.com.cn)

Americans Paul Lacy and his wife, Dorothy Lacy, are from Maine, are in their seventies and have run an embroidery workshop for 15 years in Fenghuang county, Central China's Hunan province.

Dorothy is also known by her Chinese name, Lei Tianci (雷天赐), which she created. When asked why she came up with such a name, she explained that her surname Lacy sounds like the Chinese character Lei and "Dorothy" in Greek means "God's gift", which is similar to the meaning of "Tianci" in Chinese. 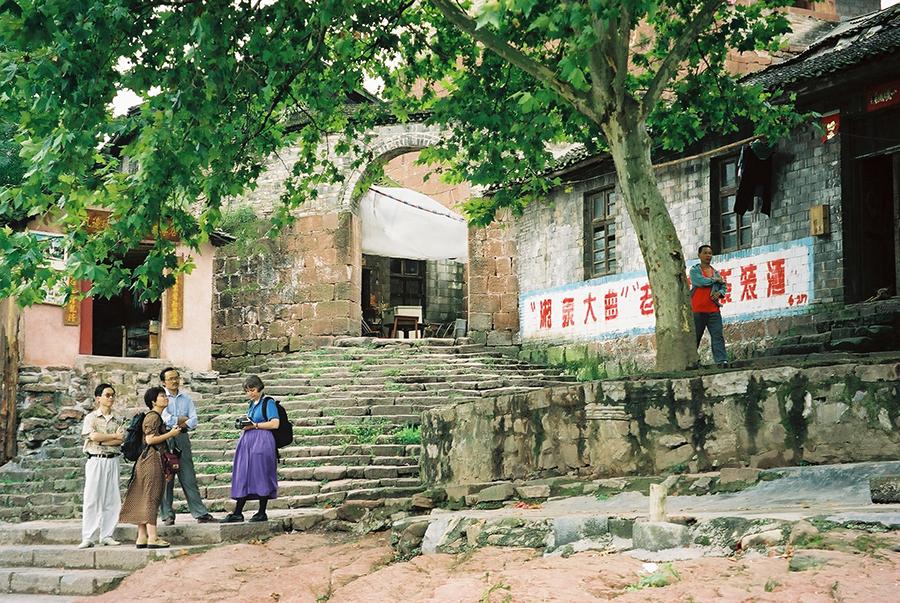 Falling in love with Fenghuang

The first time Dorothy set foot in Fenghuang was on a tour in 1999, and she immediately fell in love with the breathtaking view of the ancient town and its Miao ethnic customs and culture.

The arrival of the new millennium saw Paul and Dorothy decide to form a business and tie the knot in the following year. Then with the help of a Chinese friend, the Lacys finally opened their embroidery workshop in Fenhuang in October 2014.

Thanks to the generous assistance of their local friends, the couple gradually settled down, fit in with the local ethnic community, and got their startup on its feet. 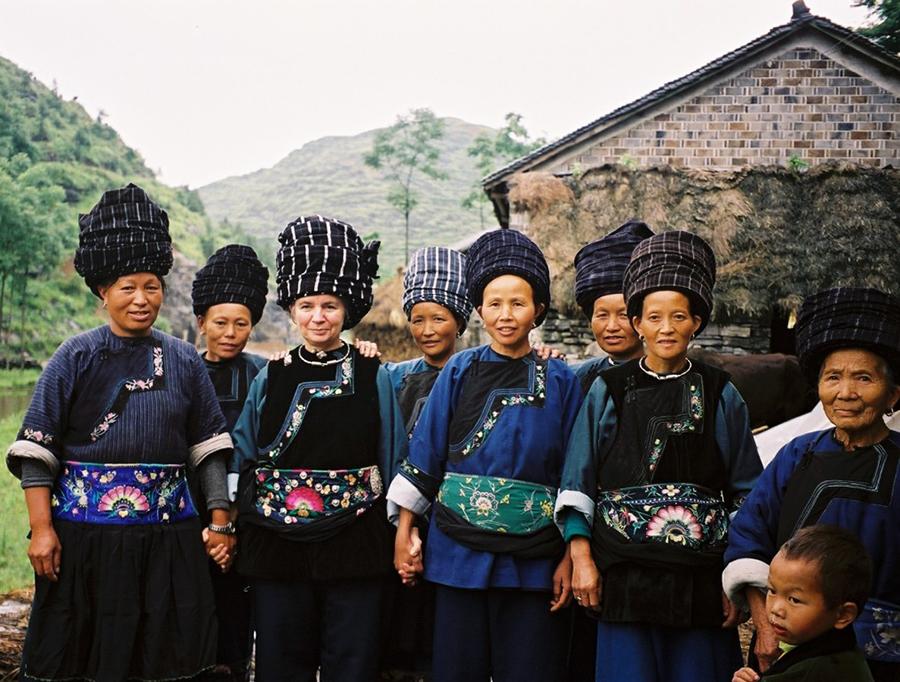 Dorothy Lacy, third from left, and some of the craftswomen who create embroidered items for the Shenaini website pose in Miao traditional costume in 2006. (Photo provided to chinadaily.com.cn)

The Lacys have lived in Fenghuang for more than 13 years since Paul sold his property in the States in 2006 and purchased a residence on the bank of the Tuojiang River.

Before they settled in Fenghuang, the couple's footsteps were left in vast swaths of China. For example, they traveled to cities, such as Beijing and Xi'an, and provinces like South China's Guizhou and Northwest China's Xinjiang Uygur autonomous region.

"Among all those places we had been to, we liked Fenghuang best for its idyllic setting and the rich customs of the Miao people. In addition, Dorothy found the Xiangxi Miao ethnic clothing uniquely appealing, as she used to major in art and design. But above all, it is the kindness and friendliness of the locals here that attracted us the most," Paul said.

However, due to language barriers and misunderstandings from the locals, the Lacys had a hard time fitting in at first. They could barely communicate with the locals for they spoke neither English nor Mandarin, but an inscrutable dialect. Therefore, when shopping, they had to show shop owners pictures of what they wanted, used body language, or let an interpreter talk to the shop owner over the phone.

Gradually, their life in Fenghuang got easier thanks to friends' help and the coverage of their stories by local media. In 2015, they were recognized by the local government as one of the top 10 beautiful families in Fenghuang, the couple said. 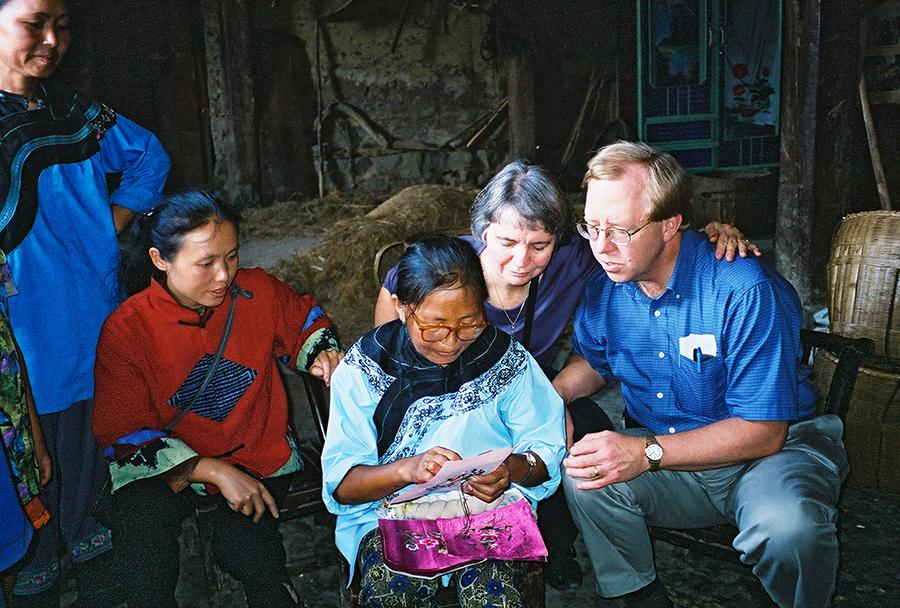 After having inhabited the ancient town for more than a decade, the couple knows Fenghuang well. Aside from a love for its history, food and customs, the couple holds a special love for Miao embroidery, which is one of the main reasons that they chose to make their second home there.

The patterns of flowers, birds, and butterflies in Miao embroidery are of bright colors and there are a great number of creative patterns. After they came to Fenghuang, they saw such beautiful handicrafts but that the locals here lead impoverished lives. Then they decided to open a company and set up a factory producing Miao hand embroidery. 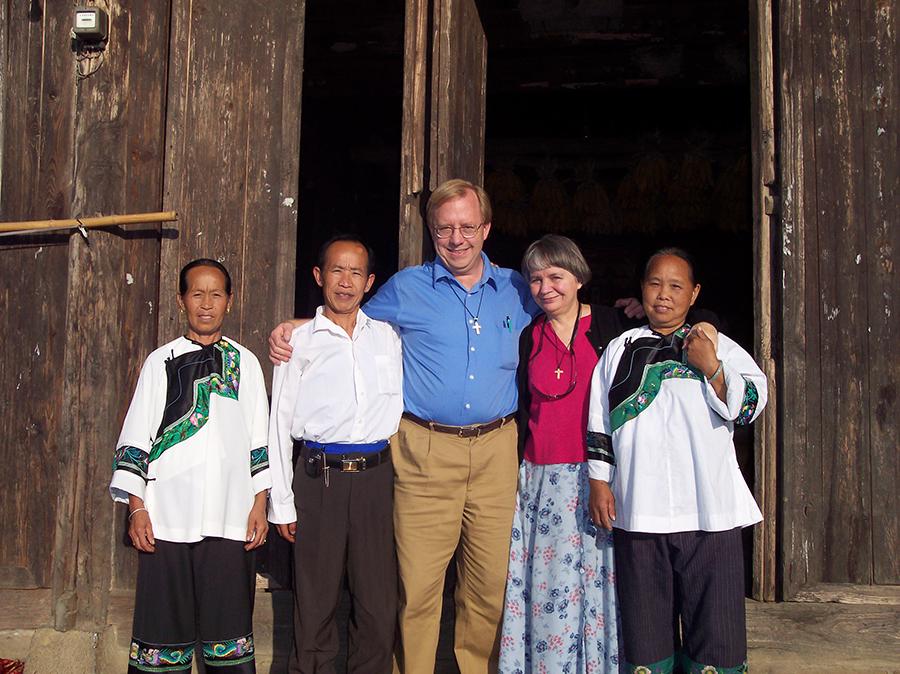 Paul and Dorothy Lacy pose for a photo with their business partners in 2005. (Photo provided to chinadaily.com.cn)

In the early days, they invested heavily in market research, pattern collection, and brand building. Now they are quite sanguine about the prospects of the company, whose annual sales are about 1.5 million yuan (roughly $216,000).

In addition to pursuing exquisite quality, they've also integrated modern design elements in the products and sustained Miao traditional embroidery styles. This helps explain why the products are adored by customers, the couple said. 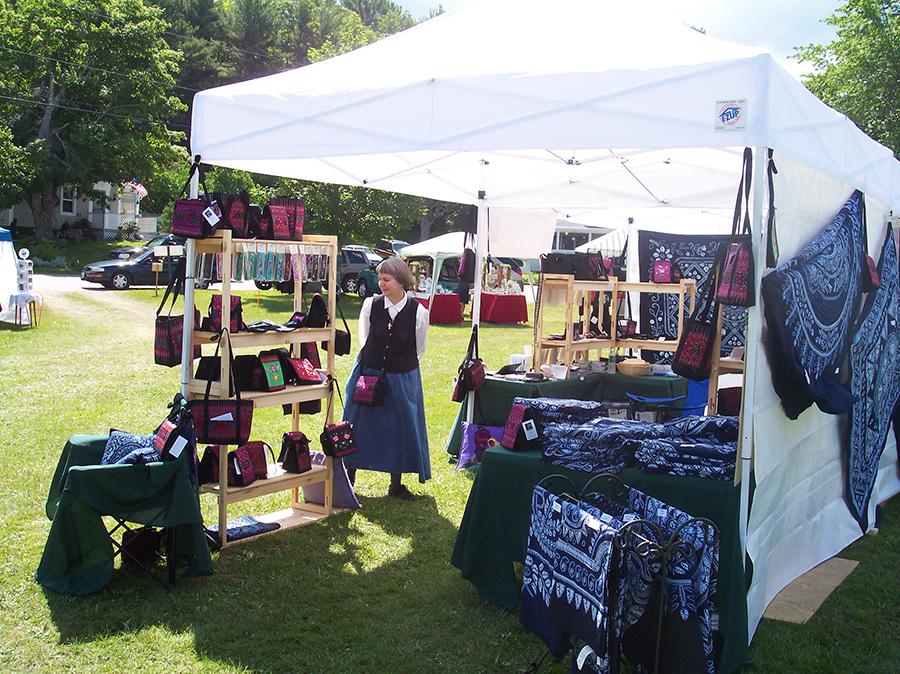 Dorothy Lacy sells Shenaini Miao embroidery at a fair in the US in 2004. (Photo provided to chinadaily.com.cn)

Inspired by Dorothy's Chinese name, the couple named their company Lacy's God-Given Ethnic Handmade Crafts Co. Plus, they created a website called "shenaini", literally meaning "God love you", to promote their products around the world.

"The meaning of my name is 'God's gift' and 'shenaini' means 'God love you' in Chinese, and we believe 'God helps those who help themselves'. The biggest reason for us to stay in Fenghuang is that we want to help lift the locals out of poverty by providing them with satisfying and profitable work. We think we will keep doing this as long as our health permits," Dorothy said. 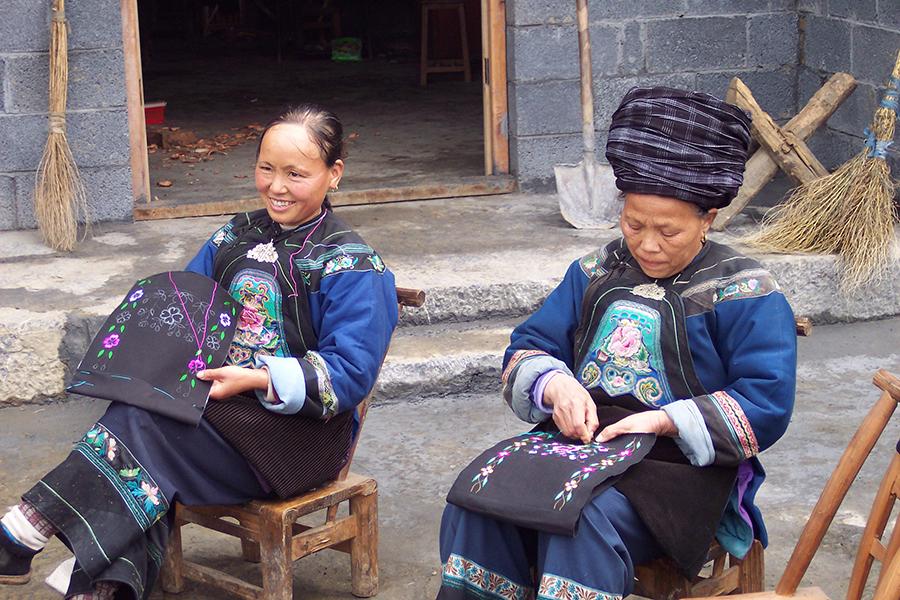 Now the Lacy's company has 30 employees, with seven working full-time and 15 or 16 women who work part-time at home. Most of the Miao women who embroider for the company have children, and they can travel to the company once a week to take embroidery materials back home so that they can work while taking care of their families, they said.

The Lacys said that their products have been selling well in the US market because Americans love ethnic handicrafts. They noted that the subprime mortgage crisis in 2008 took a heavy toll on sales. At that time, their customers were largely from South China's Guangdong province and Hong Kong. 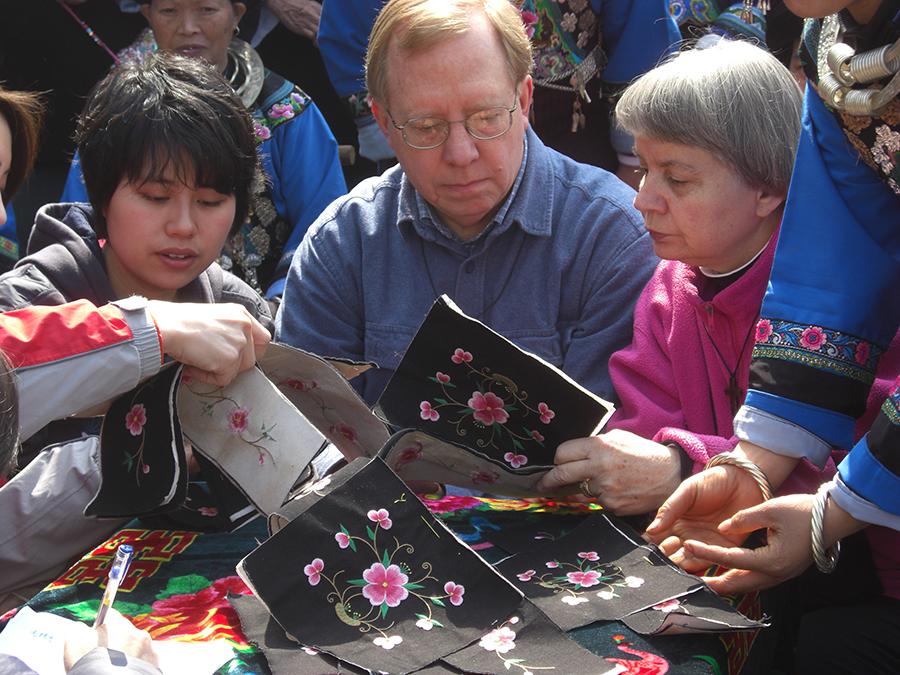 Paul and Dorothy Lacy are pictured inspecting embroideries in 2009. (Photo provided to chinadaily.com.cn)

Now they have two physical stores in Hong Kong and a big one in Chengdu. In the meantime, their products are available on their website, where customers from around the world can buy the exquisite Miao hand embroidery.

Generally, customers are mainly foreigners who love Chinese handicrafts. They recall a British woman traveling in Chengdu who bought all of the products in the store. She said she was a collector of Chinese handicrafts and she also wanted to help the locals get out of poverty by buying their products. 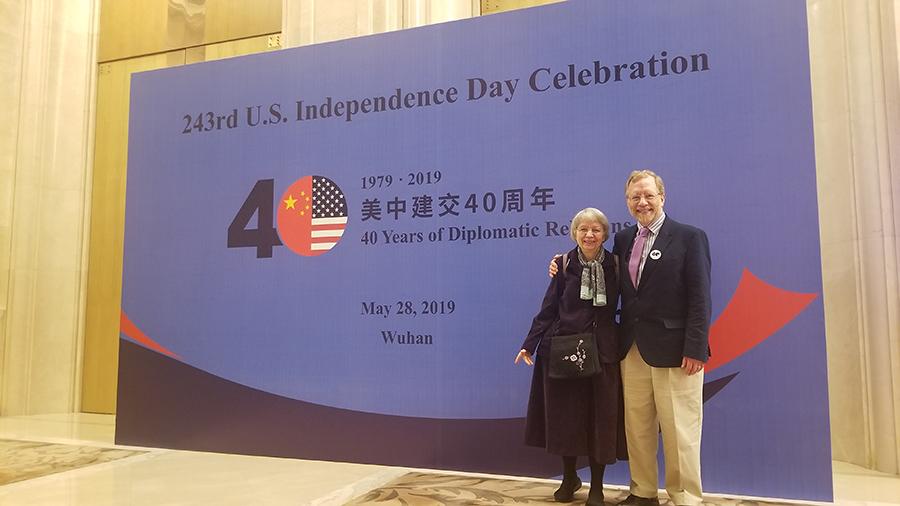 Paul and Dorothy Lacy attend the US Consulate's celebration of the 40th anniversary of the establishment of China-US diplomatic relations in Wuhan, Central China's Hubei province, on May 28, 2019. (Photo provided to chinadaily.com.cn)

The couple has four children and two grandchildren who often receive the embroidered gifts at Christmas and on birthdays. Plus, they often invite their family and friends to Fenghuang, showing them around and taking them to sample local delicacies.

Unlike children in China, those in the US don't have an obligation to provide for their parents. So their children are happy that they've built a new career and strongly support them, they said. 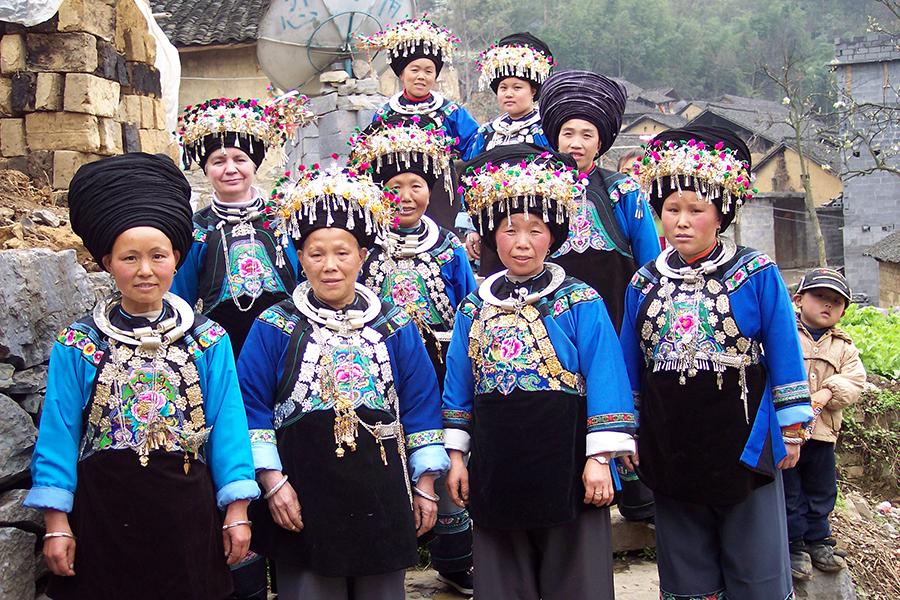 Dorothy Lacy, second row, left, and some of the craftswomen who create embroidered items for the Shenaini website pose in Miao traditional costume in 2006. (Photo provided to chinadaily.com.cn) 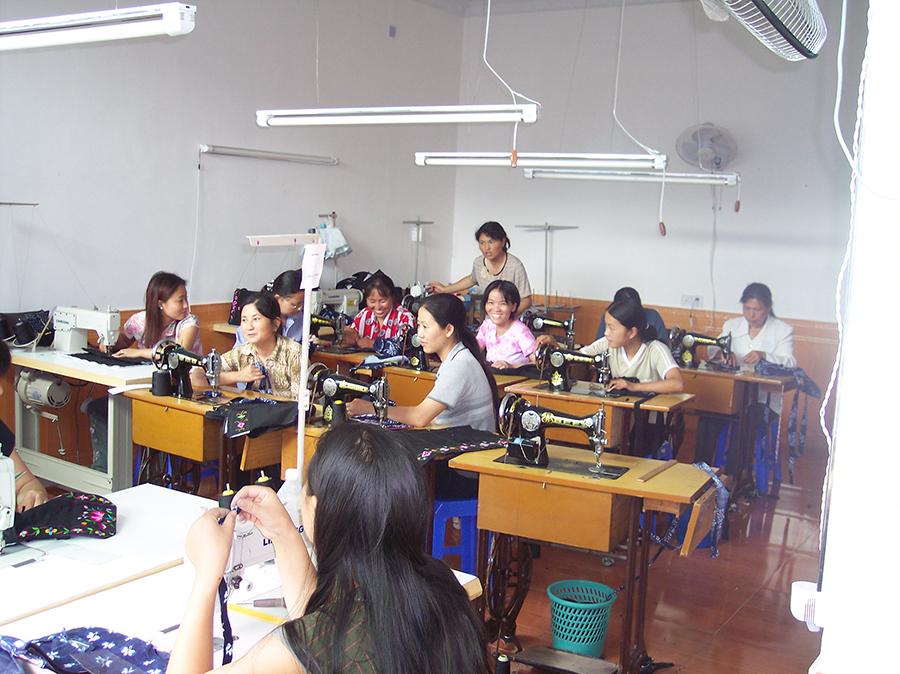 Seamstresses work at the Shenani workshop in 2004. (Photo provided to chinadaily.com.cn)

Paul and Dorothy Lacy give a gift in a red envelope to a Miao woman who is one of their "embroidery ladies". (Photo provided to chinadaily.com.cn) 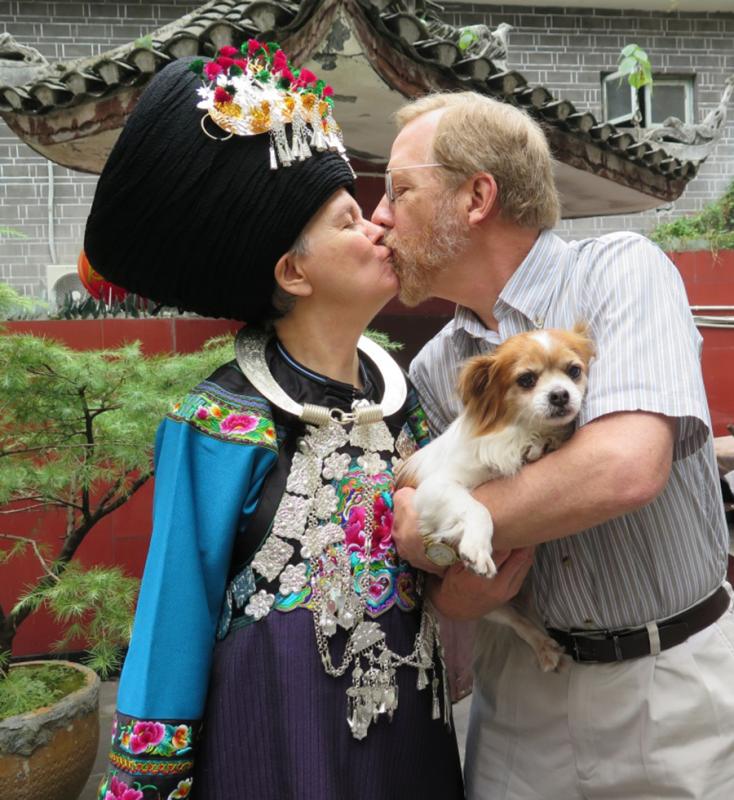 Paul Lacy and his wife, Dorothy, who is dressed in traditional Miao costume, share a kiss. (Photo provided to chinadaily.com.cn) 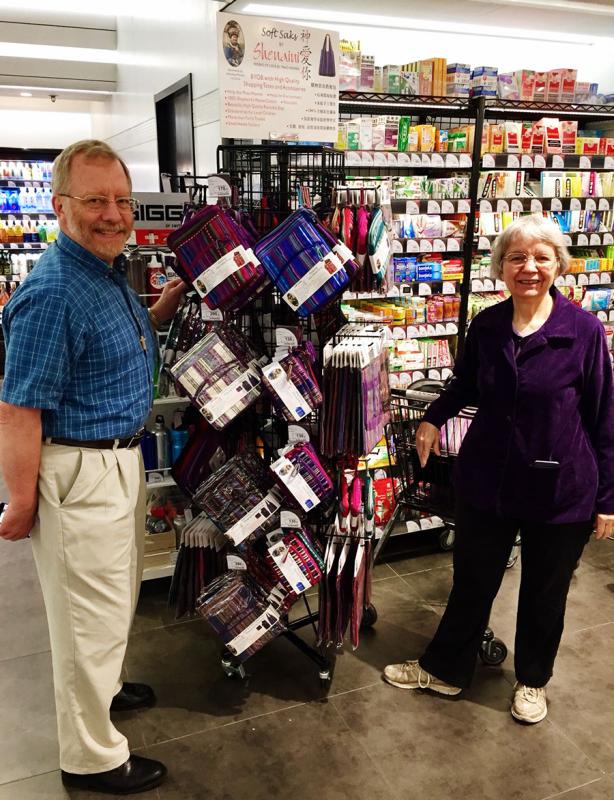 Paul and Dorothy Lacy pose in front of a display of their company's embroidery products at a Hong Kong supermarket in 2018. (Photo provided to chinadaily.com.cn) 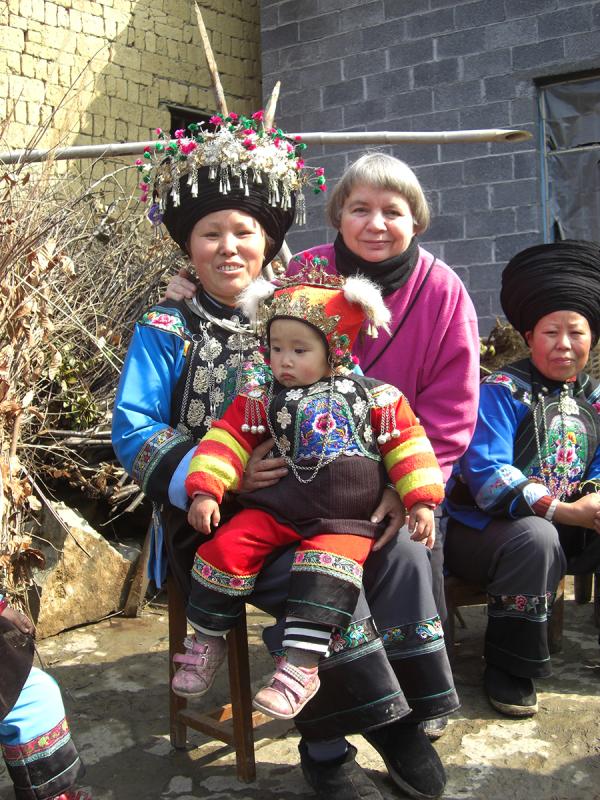 Dorothy Lacy poses with locals in Fenghuang county in 2009. (Photo provided to chinadaily.com.cn)

"The meaning of my name is 'God's gift' and 'shenaini' means 'God love you' in Chinese, and we believe 'God helps those who help themselves'. The biggest reason for us to stay in Fenghuang is that we want to help lift the locals out of poverty by providing them with satisfying and profitable work. We think we will keep doing this as long as our health permits," Dorothy said.)) ?>"/>