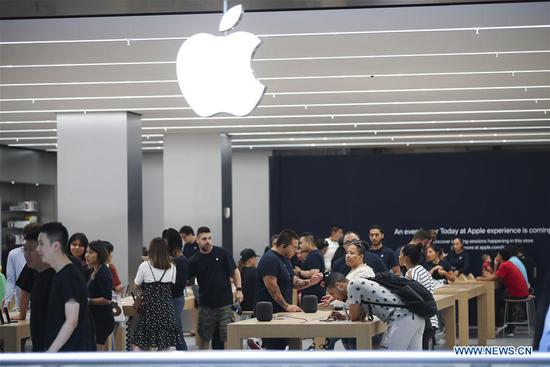 U.S. tech giant Apple became the first American company that saw its market cap hit 1 trillion U.S. dollars in the U.S. history after its shares rose 2.8 percent to a session high of 207.05 dollars around midday trading on Thursday.

Investors pushed Apple's market capitalization over the 1-trillion-dollar threshold amid expectations of new iPhones to be launched this fall, plus a record third-quarter financial report that the California-based company garnered a whopping 53.3 billion dollars in revenue.

Apple gained 11.5 billion dollars in profit, a growth of 32 percent in profit over the same period of last year.

The Apple business empire, which started from scratch at a garage by its founder Steve Jobs in 1976, has evolved from a traditional manufacturer of Mac personal computers into a leader in mobile telecom industry after it launched the revolutionary iPhone in 2007 that completely changed people's way of communication and defined the development orientation of cell phone devices.

Apple has sold more than 1.3 billion units of iPhones and its sales amounted to 229 billion dollars in 2017.

Apple is now trailed by a few other tech giants which are moving quickly toward the 1-trillion-dollar milestone, as the world's largest online retailer Amazon is now worth about 900 million dollars, and Google and Microsoft are worth more than 800 billion dollars each.