High-speed trains to go even faster 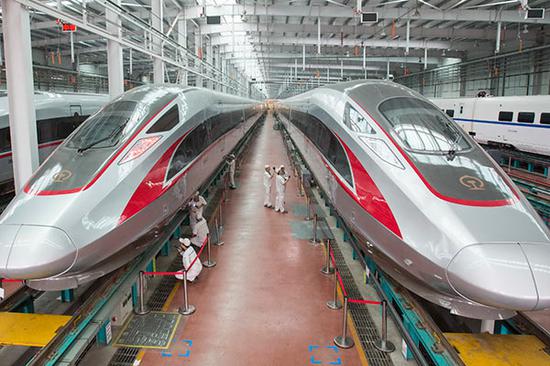 Coinciding with the 10th anniversary of the Beijing-Tianjin intercity high-speed railway on Aug 8, the Fuxing train will start running along the line at 350 kilometers per hour－up from the current 300 km/h, said Lu, general manager of China Railway Corp, at a high-speed railway forum in Beijing.

The Beijing-Tianjin intercity high-speed railway is one of China's calling cards, receiving more than 300 global political leaders from 65 countries. Russian President Vladimir Putin praised the railway when he traveled with President Xi Jinping on the line in June.

Building and operating intelligent high-speed railways is another important goal for China.

The new company will provide intelligent services to travelers, including Wi-Fi services, entertainment and online ordering.

The deep integration of the internet and the high-speed railway network will make a big impact, Tencent CEO Ma Huateng said.

An example of an intelligent high-speed railway is the one linking Beijing with Zhangjiakou, Hebei province. Next year, intelligent Fuxing bullet trains will begin to run on the Beijing-Zhangjiakou high-speed line, said Lu Dongfu, general manager of the rail operator.

The new railway is under construction and is expected to be finished in 2019. The new line will offer commutes between Beijing and Zhangjiakou, the two host cities for the 2022 Winter Olympics. It will reduce travel time to less than an hour from the current three hours.

"The superlong Fuxing train with 17 carriages will increase passenger capacity by 7.5 percent to cater to hot demand" on the line, Lu said.

China currently has the world's longest bullet train－400 meters, with 16 carriages－which can carry about 1,200 passengers. It started running on the Beijing-Shanghai line on Sunday.

More moves will be made to benefit passengers in purchasing tickets. In a trial program, passengers will have access to electronic tickets for train travel in the last quarter of this year, and the program will be rolled out nationally in 2019, Lu said.