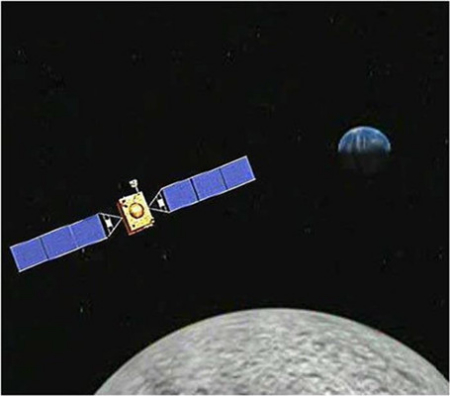 An artist's illustration of China's Queqiao relay satellite, which will relay data between controllers on Earth and China's Chang'e 4 lander-rover pair on the moon's far side. (Photo/China National Space Administration)

If all goes to plan, China will soon make history as the first country to put a lander and a rover on the far side of the moon. Information gleaned from such a mission may answer questions about the universe that we have not even thought to ask yet.

It was for this reason that I found myself talking to Zheng Yongchun at Beijing Planetarium. Zheng is an animated interviewee, but that's not to say he shouldn't be taken seriously. When I asked him what was so important about the dark side of the Moon, he was quick to correct me with a laugh "not the dark side of the moon, it's the far side!"

Pink Floyd references aside, it's an important distinction. Both sides of the Moon see the Sun at regular intervals. But tidal forces (the ones that move our oceans) slow its rotation, so little more than half of its surface always faces us.

"Like if we are dancing," Zheng said with a grin, "you can't see my back." To take Zheng's metaphor a bit further, imagine one dancer (the Earth) is pirouetting on the spot, while the other (the Moon) faces his partner as he circles her. That means that until the last century, when the Soviet Union spacecraft sent images back to the Earth, humans had never seen the side of the Moon that looks out into space.

But the Chang'e 4 mission, which will put a lander and a rover on the far side of the Moon, is about more than going where no man has gone before. "On the moon there is no air," Zheng explained, "we can observe the universe, the stars much more clearly."

Zheng held up a fist to represent the Moon. "On the far side, it is quiet. There's no radio interference," he said, pointing to the side of his hand facing away from him, "we can now listen to the universe more clearly."

The Moon's own mass can block interference from communications on the Earth, making it an excellent place to listen, undisturbed, to the music of the stars. But how will Chang'e 4 send signals back to the Earth?

On June 14, Queqiao, a relay satellite entered what's known as the Halo orbit to set up a communication link between the Earth and the Chang'e 4 lunar probe. For Zhang Lihua, project manager of the relay satellite, China Academy of Space Technology, this has posed a host of technological challenges.

Getting a satellite into this orbit, circling the second Lagrangian (L2) point, where the centrifugal force is balanced with the Earth's and Moon's gravity, is a technological feat in itself.

In Chinese legend, magpies took pity on two lovers separated by the Milky Way, so they created the Queqiao bridge, allowing the couple to be together for one day a year. The laws of physics, however, are less accommodating -- the Queqiao satellite had to adjust orbit several times before it could enter a transfer orbit to the L2 point, and the window for the satellite to brake near the moon lasted just 16 minutes.

What if they had missed that 16-minute window? Zhang was quite clear about what was at stake, "It would mean mission failure."

But thousands of hours of testing equipment and running scenarios have paid off. Next, the team will test the communicative functions of the relay satellite.

China is not the only country expecting the success of the mission with bated breath. One of the differences between Chang'e 3 and 4 missions is the level of international cooperation. Both Zhang Lihua and Zheng Yongchun talked about the benefits of including other countries in the Chinese space program.

Zhang worked with teams in Europe who were sending payloads with China's launch. "We learn a lot of things from this kind of cooperation," he said. Zheng agreed, "Lunar exploration does not only belong to one country, but to the mankind."