Trump: DPRK 'in process' of sending back remains of U.S. troops 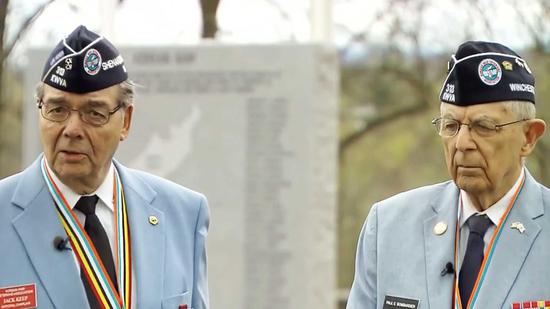 U.S. President Donald Trump said Thursday the remains of some U.S. troops will be coming home from the Democratic People’s Republic of Korea (DPRK).

Nearly 8,000 U.S. troops remain unaccounted for from the Korean War between 1950 and 1953, and some of the war’s veterans are adamant that Washington should press the issue until all of their missing comrades come home.

On the side of a rural highway in Winchester, Virginia, a small memorial honors the local men who fought and died on the Korean Peninsula more than 60 years ago.

Five pairs of bronze boots serve as a reminder of the American troops who marched off to war.

“The temperature got down to 40 or 50 degrees below zero, and our guys simply weren’t equipped for that,” said Lewis Ewing, a veteran who, at age 19, served as a corporal with the U.S. Army’s 6th Helicopter Company. “So we had a lot of guys that simply froze to death really.”

Most of the American dead came home in caskets. Some remained behind.

“We have something like 7,800 who are still missing in the Korean War,” Ewing said, “and we can’t search for them because most of them are in North Korea (DPRK).”

That may soon change.

In his talks with DPRK leader Kim Jong Un this month, Trump said he raised the issue of MIAs – American soldiers, missing in action. Trump said their loved ones asked him to help bring back their remains.

“They’ve already sent back or are in the process of sending back the remains of our great heroes who died in North Korea (DPRK) during the war,” Trump said on Thursday.

“I met their families,” said Paul Bombardier, a Korean War veteran. “Their closure would be to get positive proof that they got some of their kinfolk back.”

Bombardier said America owes his friend – an American pilot – that much. “I was the last man to see him alive. Because they took off on their mission and 10 minutes later they were reported shot down. No bodies, no crash site.”

“Even though we’re talking about a second or third generation of family,” said Jack Keep, another local veteran, “at least there would be some comfort and some satisfaction to know that their body was recovered and brought back here to our homeland again.”

Officially the Korean War never ended. And for some, words won’t change that.

But for others, recent cross-Pacific overtures are a promising start. “I think most of us realize that we have to accept things with some reserve until we are able to verify what’s happening,” Keep said. “But I think this is a good first step.”

A previous agreement led to the returned remains of 229 Americans before nuclear tensions abruptly halted cooperation. That was more than a decade ago. These Korean War veterans are hoping for a sustained effort that will last until every missing soldier is brought home.

The Chinese People's Volunteers (CPV) fought alongside the DPRK army in the Korean War against the the Republic of Korea (ROK) army and U.S.-led UN forces between 1950 and 1953.

Almost 200,000 CPV soldiers have been confirmed to have been killed in the war, with most of them buried on the Korean Peninsula.

Since 2014, the ROK has transferred the remains of 589 Chinese volunteer soldiers killed in the Korean War, including 20 more this year.