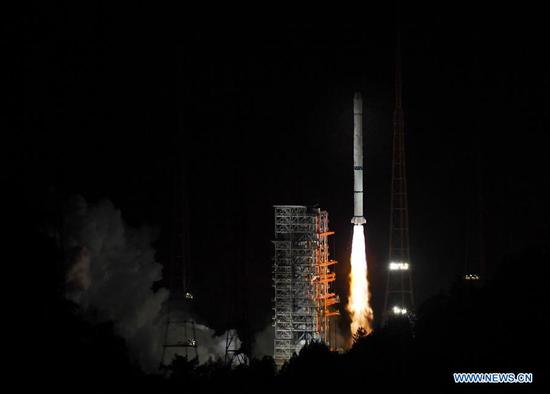 President Xi offers meteorological services to all during SCO Summit

China will offer meteorological services to all parties through its Fengyun 2 weather satellites, President Xi Jinping said in a speech at the two-day Shanghai Cooperation Organization Summit on Sunday in Qingdao, Shandong Province.

He also called for solid cooperation in areas such as education, science, technology and disaster relief.

The summit concluded on Sunday.

China launched its Fengyun 2H satellite, the last in the Fengyun 2 series, on June 5, greatly improving weather forecasting accuracy and enhancing its capability to provide better meteorological services to countries participating in the Belt and Road Initiative, including SCO countries.

According to the China Meteorological Administration, there are four satellites in the Fengyun 2 series currently in orbit. In response to a request from the World Meteorological Organization and the Asia-Pacific Space Cooperation Organization, the position of Fengyun 2H was changed 7.5 degrees westward from the original plan.

With the Fengyun 2H, the satellites in the series are now able to cover all Chinese territory, as well as countries involved in the Belt and Road Initiative, the Indian Ocean and some African countries, the administration said.

Equipped with a scanning radiometer and space environment monitor, the Fengyun 2H will provide real-time cloud and water vapor images, as well as weather information, to clients in the Asia-Pacific region, said Wei Caiying, chief commander of Fengyun 2H ground applications and deputy director of the National Satellite Meteorological Center.

Many of the SCO countries are characterized by high mountains, deserts, oceans and a lack of meteorological information. The number of meteorological disasters in the region is more than double the world average, the administration said.

It said SCO countries could apply to be tapped into an emergency mechanism it established in April when they are stricken by disasters like typhoons, rainstorms, severe storm patterns, sandstorms or fires.

"China Meteorological Administration will make frequent observations of the disaster-stricken areas - every five to six minutes - after receiving an application. The information will be offered to the affected countries to support their disaster control and relief efforts," the administration said.

The World Meteorological Organization has included China's Fengyun series of meteorological satellites as a major part of the global Earth observation system. They provide data to clients in more than 80 countries and regions.

Since the Fengyun 2A was sent into orbit in 1997, the Fengyun 2 series satellites have monitored more than 470 typhoons emerging in the western Pacific Ocean and South China Sea.