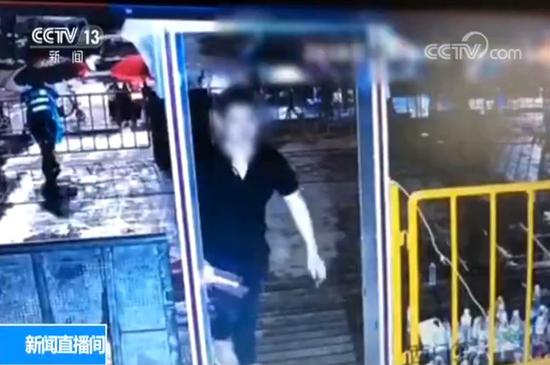 A fugitive was passing through the security check when cameras equipped with facial-recognition technologies identified him from a database of suspects and alerted the police. (Photo/CCTV.com)

Jacky Cheung, famed Hong Kong singer, was recently dubbed the "Nemesis of Fugitives" by Chinese netizens after three wanted criminal suspects were detained at three of his concerts across China in two months.

The fugitives were passing through security checks when cameras equipped with facial-recognition technologies identified them from a database of suspects and alerted the police. One of the suspects, a 31-year-old man identified as Ao, said he felt safe among the huge crowd and was shocked when police detained him at Cheung's concert in Nanchang, Jiangxi province, on April 7.

Cheung's streak of trapping fugitives is so hot that police from Luoyang, Henan province, the venue for Cheung's July concert, declared "we are ready" on its Sina Weibo blog. These incidents cast a spotlight on facial recognition technology, which continues to amaze and to some extent worry the public with its unmatched effectiveness in supporting detective work.

"Police used to have a hard time watching and selecting surveillance footage. Now the technology can sort through a mountain of videos and lock down the suspect's position within a few seconds," said Wang Jun, chief program director from IntelliFusion, a tech company in Shenzhen, Guangdong province.

Since the start of 2017, the company's facial recognition technology has helped solve more than 4,000 police cases across the city, including 500 criminal cases. The technology can also be used to find abducted people and shame jaywalkers and traffic violators by displaying their faces to the public, he added.

Facial recognition systems work by analyzing the target's key facial features such as distances between eyes and width of the nose, and then comparing this information with a database. However, movement, shadows and sunlight can affect the system's accuracy.

In the past few years, facial recognition has become more integrated into ordinary lives. Smartphone users can scan their face to unlock phones and complete online payments. Companies and universities are also using the technology for taking attendance and security purposes.

Cameras in airports, malls and train stations can verify people's identities by scanning their faces. Some hotels, stations and events, such as Auto China 2018, are using face-scanning to allow entry.

Guo Haishan, 25, an employee at a consumer goods company, said she was "face-printed" every morning as she clocked in for work. Compared with being fingerprinted, "facial recognition is more accurate and quicker, and it is more hygienic because we do not have to make skin contact by touching the same machine," Guo said.

Despite its advantages, the use of facial technologies also raised concerns over data security and privacy. Silvia Bi, a 24yearold bank employee in Shenzhen, said she is skeptical of companies and governments collecting large amounts of facial data. "I do not see regulations or laws in place to protect facial information from leaking," she added.

US tech-giant Amazon recently came under fire for selling its facial recognition programs to law enforcement agencies in the United States. The American Civil Liberties Union, a freedom advocacy group, said the technology could be misused to undermine personal privacy and asked Amazon in an open letter to stop the practice.

Wang said his clients shared the same concerns, but Chinese companies and officials are working on new rules to strike a balance between new technology and privacy protection, such as only collecting facial data in public areas.

Wang's company also launched a privacy protection laboratory jointly with the Shenzhen public security bureau and Chinese telecommunications giant Huawei to craft new security measures, as well as push for legislation and regulations for the technology.

"The market prospect of facial recognition is huge, but how to make this technology safe, convenient and capable of making people happier, that is the key to sustainable development," he said.