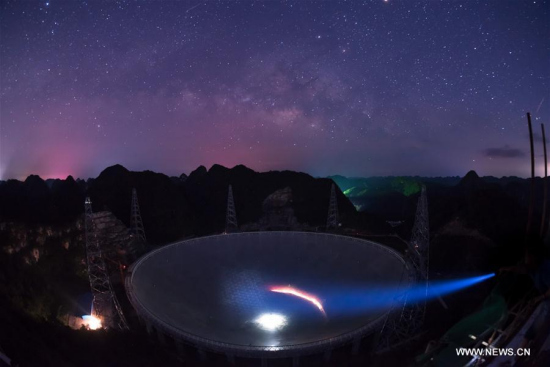 Local media from Guizhou said on Tuesday that a data processing laboratory is going to be constructed for China’s Five-hundred-meter Aperture Spherical Radio Telescope (FAST), which is located in the province.

The project is to be jointly launched by Guizhou Normal University and the National Astronomical Observatories, and intended to process the data generated by FAST.

“The tremendous amounts of data captured by FAST cannot directly identify astronomical phenomena. They must be processed first before they are understandable,” said Zhi Qijun, head of the university's School of Physics and Electronic Science, and leader of the data processing lab project.

Zhi said the lab's main task is to process and analyze the massive amounts of astronomical observation data collected by FAST and other telescopes from home and abroad, and conduct scientific research to discover new objects and astronomical phenomena, for which the lab will also provide theoretical explanations, pushing forward the theoretical development of astrophysics.

It will take three years to build the lab and once completed, it will provide local support for FAST and promote the development of the province’s big data industry.

Built last September, FAST is the world’s largest single-dish radio telescope and it is located in a naturally-formed karst depression in southwest China's Guizhou Province. It has identified nine pulsars since it began operation last year.