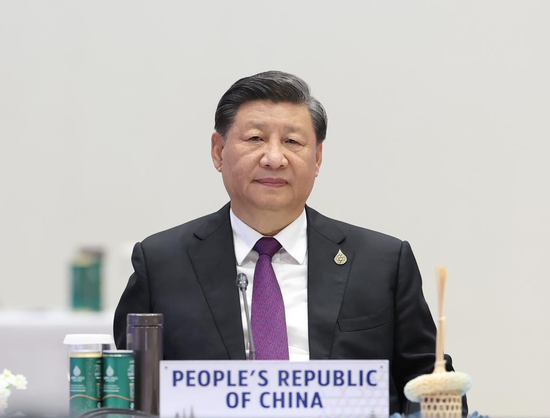 Chinese President Xi Jinping on Friday stressed the need to follow the spirit of the Asia-Pacific family, look after one another like passengers in the same boat, and steadily move toward an Asia-Pacific community with a shared future.

Addressing the 29th Asia-Pacific Economic Cooperation (APEC) Economic Leaders' Meeting here at the Queen Sirikit National Convention Center, Xi said that "the Asia-Pacific is our home as well as the powerhouse of global economic growth."

Upon his arrival at the convention center, Xi was warmly received by Thai Prime Minister Prayut Chan-o-cha.

Xi, in his speech titled "Shouldering Responsibility and Working Together in Solidarity to Build an Asia-Pacific Community with a Shared Future," said that "over the past decades, robust economic cooperation in the region has created the 'Asia-Pacific miracle' admired across the world. Asia-Pacific cooperation has taken deep roots in the hearts of the people."

Today the world has come to another historical crossroads, and this has made the Asia-Pacific region even more important and prominent in its standing and role, he said.

Facing the new circumstances, Xi called for joining hands to build an Asia-Pacific community with a shared future and take Asia-Pacific cooperation to a new height. To this end, he made several proposals.

Xi urged countries to uphold international fairness and justice and build an Asia-Pacific of peace and stability, noting that the rapid growth of the region over the past decades attests to the critical importance of mutual respect, solidarity and cooperation, and of consultation among all parties for the greatest denominator when something comes up.

"We should always assume the vision of common, comprehensive, cooperative and sustainable security, and respect the sovereignty and territorial integrity of all countries. No one should interfere in other countries' internal affairs, and everyone should respect the development path and social system chosen independently by the people of each country," he said.

"We should take seriously the legitimate security concerns of every country, and promote peaceful settlement of differences and disputes among countries through dialogue and consultation. We should take an active part in global governance and make the international order more just and reasonable to ensure peace and stability in the Asia-Pacific region and beyond," he said.

Xi called for staying committed to openness and inclusiveness and bringing about prosperity for all in the Asia-Pacific.

"We need to make sure that development is for the people and by the people, and that its fruits are shared among the people, and we should promote prosperity for all in the Asia-Pacific," said the Chinese president.

Xi said China will work with other parties on the full and high-quality implementation of the Regional Comprehensive Economic Partnership (RCEP), and continue working toward joining the Comprehensive and Progressive Agreement for Trans-Pacific Partnership (CPTPP) and the Digital Economy Partnership Agreement (DEPA), for the purpose of promoting integrated development of the region.

China will consider holding the third Belt and Road Forum for International Cooperation next year to provide fresh impetus for the development and prosperity of the Asia-Pacific and the world, he added.

Meanwhile, Xi called for efforts to strive for green and low-carbon development and ensure a clean and beautiful Asia-Pacific.

He stressed the need to enhance economic and technical cooperation, speed up coordinated digital and green development, advance the transition and upgrading of energy, resources, and industrial and consumption structures, and promote green economic and social development.

China will provide support for the implementation of the Bangkok Goals on Bio-Circular-Green (BCG) Economy, which aims to advance ecological and environmental protection and economic development in a coordinated way, he said, adding that Asia-Pacific countries are welcome to take an active part in the Global Development Initiative (GDI) and enhance practical cooperation in poverty reduction, food, energy, health and other areas.

In addition, Xi asked countries to bear in mind their shared future and make the Asia-Pacific a region where all are ready to help each other.

"We need to act on the purposes and principles of APEC, and continually deepen the Asia-Pacific partnership featuring mutual trust, inclusiveness and mutually beneficial cooperation," he said.

Xi stressed that last month, the 20th National Congress of the Communist Party of China was held successfully, setting the course and providing the blueprint for China's development for now and for years to come.

China is ready to pursue peaceful coexistence and common development with all countries on the basis of mutual respect, equality and mutual benefit, he said.

"We will advance a broader agenda of opening up across more areas and in greater depth, follow the Chinese path to modernization, put in place new systems for a higher-standard open economy, and continue to share our development opportunities with the world, particularly with the Asia-Pacific region," he noted.

Toward the end of his speech, Xi quoted a Thai proverb that goes, "You reap what you sow." He noted that APEC economies have jointly sown the seed of the Putrajaya Vision and that it is time to cultivate, nurture, and foster the blossoming flower of common development of the Asia-Pacific.

The meeting was chaired by Prayut under the theme of "Open, Connect, Balance."

Wang Yi was present at those events. 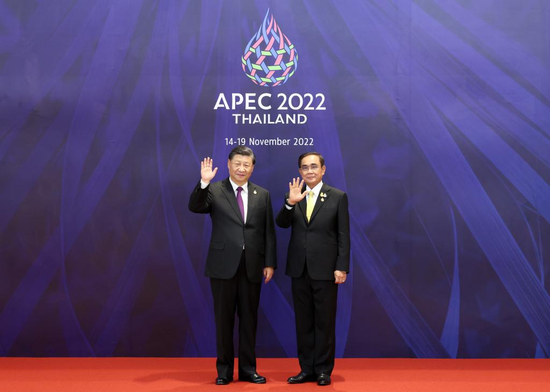