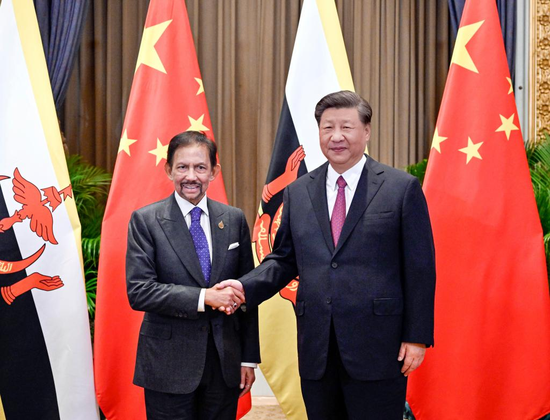 Chinese President Xi Jinping on Friday called on Brunei and other members of the Association of Southeast Asian Nations (ASEAN) to work together to build the South China Sea into a sea of peace, friendship and cooperation.

China is ready to work with Brunei and all other ASEAN member states to actively advance maritime cooperation and the consultation on the Code of Conduct in the South China Sea, Xi said while meeting with Sultan Hassanal Bolkiah of Brunei Darussalam on the sidelines of the 29th Asia-Pacific Economic Cooperation (APEC) Economic Leaders' Meeting.

On China-Brunei relations, Xi said the two countries are each other's close neighbors across the sea, trustworthy friends and partners of common development, which have set an example of harmonious coexistence and mutually beneficial and win-win interactions between countries of different sizes.

Noting that next year marks the fifth anniversary of the strategic cooperative partnership between the two countries, he urged both sides to work together to attain greater development of the partnership and bring more benefits to people in both countries.

Xi stressed that it is important for the two sides to keep up communication and exchanges, make good use of the Joint Steering Committee, and advance practical cooperation across the board in a coordinated manner.

The two sides should build stronger synergy between their national development strategies, pursue high-quality progress of the key projects under the Belt and Road Initiative, deepen cooperation in such areas as infrastructure, agriculture, fishery and energy, foster drivers for cooperation in green development and the digital economy, and promote travel and exchanges between the two peoples in an orderly manner, he added.

He said China appreciates Brunei's active efforts to advance China-ASEAN relations during its ASEAN Chairmanship, and stands ready to further enhance communication and coordination with Brunei within frameworks like ASEAN and APEC.

On his part, Sultan Hassanal Bolkiah once again congratulated Xi on the success of the 20th National Congress of the Communist Party of China (CPC), and on his election as General Secretary of the Central Committee of the CPC.

Noting that China has successfully achieved the first centenary goal under Xi's strong leadership, the Sultan expressed confidence that China will continue moving toward prosperity and development and realize the strategic goals it has set out.

On Brunei-China relations, he said the two countries enjoy friendly relations and fruitful cooperation. Brunei is grateful for China's donation of COVID-19 vaccines, and thanks China for giving strong support to Brunei as ASEAN Chair.

He reiterated that Brunei is firmly committed to the one-China policy and stands ready to work with China for greater success in the bilateral ties.

Brunei welcomes China's active participation in the country's economic diversification and is committed to closer exchanges and cooperation in economy and trade, education, people-to-people and cultural exchanges, sports, defense and other areas, he said.

He pledged that Brunei will continue to play an active role in enhancing ASEAN's comprehensive strategic partnership with China.