Chinese Ambassador to South Korea Xing Haiming (C) and other members of the embassy cheer up for Daegu, in Seoul, South Korea, Feb. 27, 2020. (Chinese Embassy in South Korea/Handout via Xinhua)

The Chinese Embassy in South Korea on Thursday donated around 25,000 medical masks to the city of Daegu in southern South Korea in an effort to support the city which was hit by COVID-19 outbreak.

Late in the evening, a truck carrying masks departed from the Chinese Embassy in Seoul for the city of Daegu, about 300 km southeast of the capital.

A banner hung on the outside of the trunk read, "Fighting, Daegu! Fighting, South Korea!" On the banner was also written a poem from the Choe Chi-won, an ancient well-known Korean scholar who once pursued study in China's Tang dynasty for many years. The poem reads, "Far distance cannot separate us, and we all live in a united world."

Chinese Ambassador to South Korea Xing Haiming said that China and South Korea share weal and woe and help each other in the fight against the COVID-19 epidemic. 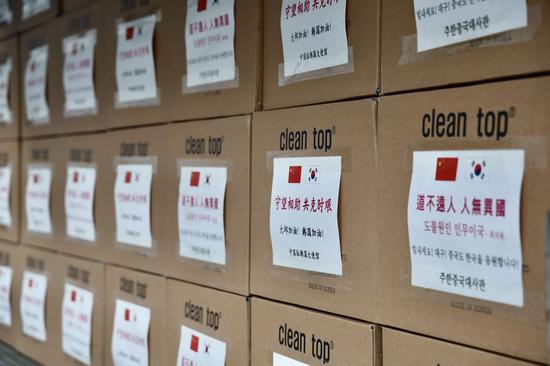 "The Chinese people will always remember the helping hand extended by the South Korean people in times of a crisis," said the ambassador.

South Korea confirmed 505 more cases of the COVID-19 on Thursday, raising the total number of infections to 1,766, and the death toll rose to 13. Of the total patients, 1,132 were residents in Daegu, which became the epicenter of the viral spread here as the biggest cluster of mass infections was found in the city with a 2.4 million population.