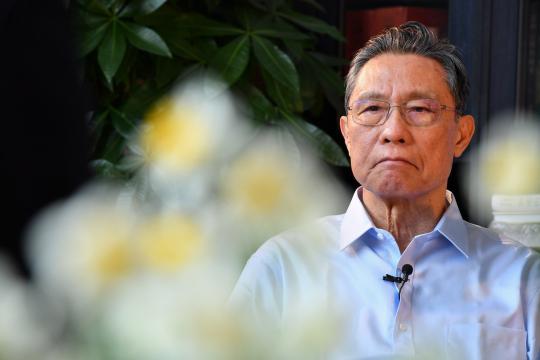 The novel coronavirus pneumonia epidemic is likely to be brought under control on the Chinese mainland by the end of April, said renowned respiratory expert Zhong Nanshan, who also called for enhanced global cooperation to fight the disease.

He made the remark at a news briefing in Guangzhou, Guangdong province, on Thursday. Many foreign researchers predicted that the outbreak would not be contained until the end of May, he said.

However, Zhong, 84, said his forecast took into account the great efforts led by the central government and the massive support and participation from the public.

According to health authorities, many provinces, regions and municipalities in the mainland have reported no new confirmed cases for several days in a row.

"The first case of novel coronavirus pneumonia was reported in China, but its source may not be in the country," he added.

On the latest situation at the epicenter of the outbreak in the capital of Hubei province, Zhong said he was pleased to learn that the Huo-shenshan and Leishenshan hospitals, which had been built within weeks to cope with the huge number of cases in the city, now have spare beds.

But he said potential cross-infection remains a serious issue. "Great efforts should be made to diagnose the suspected cases and distinguish flu patients from COVID-19 patients to avert more infections in the following months."

Nationwide, despite the massive flow of migrant workers returning to work, the effective and concrete containment measures that have been introduced mean that China won't see a major growth in cases in the coming months, he added.

However, defects still exist in the country's epidemic response, he said. Public health bodies such as disease control and prevention centers lack decision-making powers regarding the response to outbreaks.

"In Wuhan, human-to-human transmission was not publicized until Jan 20. In truth, the disease control and prevention authorities had confirmed that earlier but couldn't inform the public itself," he said.

According to Zhong, the number of infections would have been much fewer if strict measures had been implemented in early December.

If the current situation with the disease control and prevention centers in China remains unchanged, "such problems might arise again".

Zhong added that the current fast spread of the outbreak in foreign countries meant that it was difficult to correctly forecast the global trend of the virus.

The development of the epidemic within China should remain the primary concern as it emerged within the nation, but he didn't rule out the possibility it may become more of an imported problem in the future.

He called for more international cooperation to fight what he called a "human infection, rather than a China disease".

He said that he would share China's experience with the European Respiratory Society this weekend through a videoconference.

The National Health Commission said on Thursday it had received reports of 433 new confirmed cases of novel coronavirus infection and 29 deaths on Wednesday from 31 provincial-level regions on the mainland, bringing the total number of confirmed cases to 78,497.

Among the deaths, 26 were in Hubei province, and one each in Beijing and Heilongjiang and He-nan provinces, according to the National Health Commission.