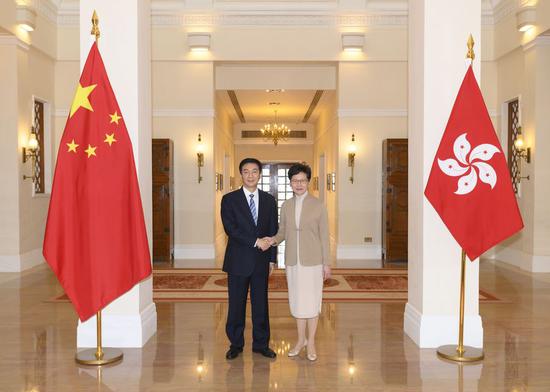 The Chief Executive of the Hong Kong Special Administrative Region (HKSAR) Carrie Lam on Thursday met with Luo Huining, the new director of the Liaison Office of the Central People's Government at the Government House.

The two sides had full exchanges on the current social situation in Hong Kong and their respective performance of duties in accordance with the law.

Lam extended a warm welcome again to Luo on his assumption of the new post in Hong Kong.

Although Luo has just taken up the post, he is familiar with the situations in Hong Kong, Lam said, expressing the hope for enhancing communication and cooperation with Luo in the future to promote the work involving the mainland and Hong Kong.

During the meeting, Lam briefed Luo on the work of the HKSAR government over the past two years as well as the social unrest arising from the legislative amendment since June last year.

They both agreed that Hong Kong had experienced the most severe situation since its return to the motherland during the past seven months, affecting seriously all aspects of society, and that restoring social order as soon as possible is the common aspiration of the general public.

Lam said the HKSAR government will, in accordance with the Basic Law and the "one country, two systems" principle, spare no effort to curb violence and uphold the rule of law in order to find a way out of the current impasse.

As the severe economic situation may affect the livelihood of the general public, especially the grassroots, the HKSAR government will proactively study and introduce relief measures to help the people, Lam said.

Luo said he had a friendly exchange with Lam when leading a Shanxi provincial delegation to Hong Kong at the end of 2018 for business and he was deeply impressed by the competence of the chief executive.

Luo spoke highly of the hard efforts of Lam and the HKSAR government during social unrest, including measures to rein in chaos and help businesses and residents weather out hardships.

The liaison office will, as always, continue to fully respect and support Lam and the HKSAR government to govern in accordance with law, Luo said.

The two sides pledged to further implement the "one country, two systems" principle and maintain Hong Kong's long-term prosperity and stability in accordance with the requirements of the central authorities.

Joint efforts will be made to stop violence, restore order, and safeguard the rule of law. Measures will be taken to develop the economy, improve people's livelihood and promote the development of the Guangdong-Hong Kong-Macao Greater Bay Area. They also agreed on improving communication and cooperation to better perform duties.

They both firmly believe that Hong Kong will definitely return to the right track and achieve greater success with the care of the central authorities, the support of the motherland and the joint efforts of all sectors of Hong Kong society.