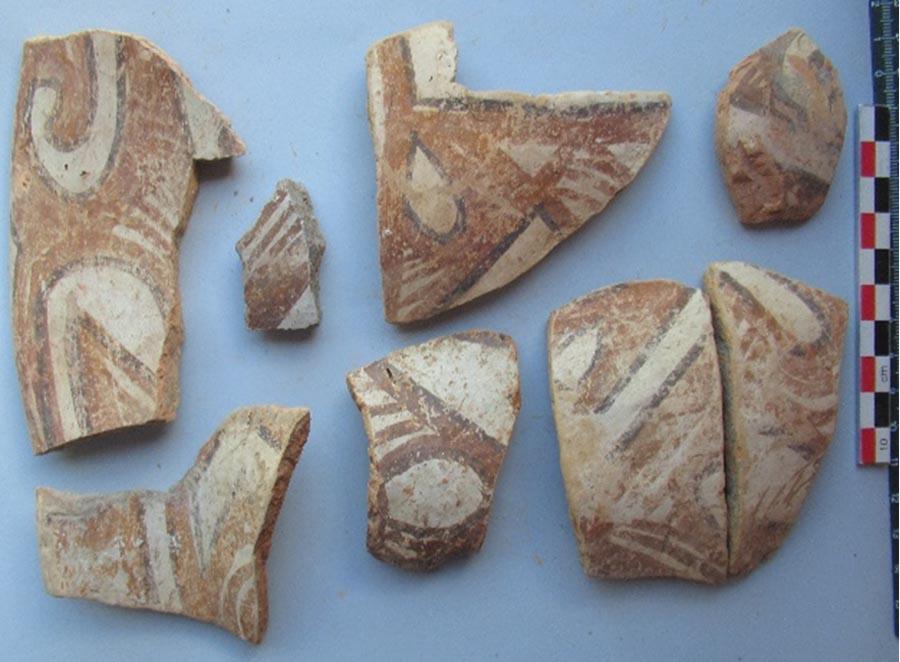 Yangshao Culture, which dates back to between 5000 and 3000 BC and is best known for its colorful pottery vessels, is undoubtedly one of his most important discoveries, one that unveiled China's rich Neolithic heritage.

But because similar patterns were discovered emblazoned on the contemporary ceramics of Cucuteni culture in what today is Romania, Andersson made an arbitrary deduction: Chinese civilization was not original. Instead, he believed, it was introduced from the West via the Eurasian grasslands. This theory influenced academia for decades.

Although Andersson's speculation was later disproved by subsequent archaeological findings in China that reflected the spontaneous roots of Chinese pottery culture, Cucuteni remained a mesmerizing name for generations of Chinese archaeologists: Where did the similarities arise?

In July, four archaeologists from the Institute of Archaeology at the Chinese Academy of Social Sciences set off on a two-month trip to explore Cucuteni Culture in Romania, on what was the first phase of excavations in the village of Dobrovat, near the city of Iasi in that country's northeast.

"Andersson's archaeological findings and mindset have their limitations," Wen Chenghao, an archaeologist working on the project, tells China Daily. "However, he left a lasting legacy for us. It was necessary for us to gain a comprehensive overview of our own for comparison."

A pair of gilded silver dragons found in a 2,000-year-old Xiongnu graveyard in Mongolia. (Photo provided to China Daily)

A 6-hectare heritage site in Dobrovat, dating back to around 4300 BC in the early stages of Cucuteni culture, was the focus of their research. The remains of nine houses had been discovered and the earth, which was used to construct them, was found to be scorched.

Charred earth was also found at sites dating back to the Yangshao period in China, and were widely assumed to be a type of consolidated building material.

According to Wen, however, in Dobrovat, the condition of the 20-centimeter-thick blocks of earth－some of them vitrified at a temperature of over 1,000 C－instead suggested that these dwellings had been deliberately burned to the ground.

"It's likely that these intense fires were not accidentally caused by war or looting," he says. "This may reveal that certain religious rituals took place when people abandoned their homes. This inspired our future studies into similar phenomenon in China."

Since no Cucuteni culture graveyards have yet been discovered, Wen further speculated that Cucuteni burial customs may have dictated that people were burned together with their houses after they had died.

"After being inhabited for years, the houses were no longer treated as wood and earth," Wen says. "Instead, they were thought to be 'alive'－and something spiritual."

He says he has learned a lot from his Romanian colleagues.

"When we conducted careful and detailed analysis of these earth structures, just like examining and rebuilding the broken pottery discovered there, they helped us reconstruct the original appearance of these dwellings and reveal an abundance of easily overlooked historical information."

Chinese archaeologists will also help to solve problems at the site.

Since two-thirds of the Dobrovat site is covered by thick forest, most electronic detectors don't work there. Wen says they will take a "Luoyang spade"－a traditional tube-shaped testing tool widely used by Chinese archaeologists to examine the layers of soil to locate possible underground relics－to Dobrovat for the second phase of excavations later this year.

Although two months seemed too short a time to completely answer the questions raised by Andersson a century ago, Wen says the hypothesis of communication between the Cucuteni and Yangshao cultures, separated by 7,000 kilometers, seems improbable.

"It was our romantic imagination before we did field research in Dobrovat," he says. "However, despite the similar patterns on the colorful pottery, other unearthed objects from the two cultures appear markedly different.

"Nevertheless, their apparent 'similarities'－even the patterns of colorful potteries－seem to reflect that people in different regions shared paths in social development carried over from Neolithic times to the Bronze Age. Comparative cross-cultural studies require an insight into historical precedents rather than by simply examining scattered signals." 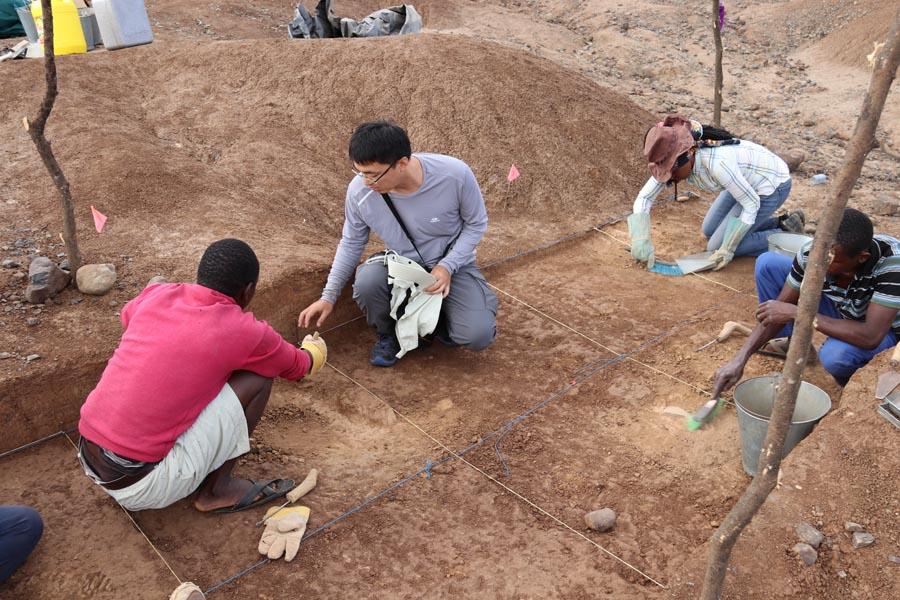 Zhao Qingpo (center), an archaeologist from the Henan Provincial Institute of Cultural Heritage and Archaeology, is engaged in excavation work at the Lake Bogoria site in Kenya, studying the origin of modern humans. (Photo provided to China Daily)

In Kenya, Chinese archaeologists from the Henan Provincial Institute of Cultural Heritage and Archaeology and Shandong University conducted a joint research project into the origins of modern humans－a hot topic in global academia.

They began excavations in September at a site on Lake Bogoria dating back to the mid-Paleolithic period, which in Africa refers to an era between 250,000 and 40,000 years ago.

"Fundamental methodologies of Paleolithic archaeology are basically the same all over the world," Zhao Qingpo, an archaeologist from the Henan Provincial Institute of Cultural Heritage and Archaeology, says. "Consequently, it is really convenient for us to have exchanges with overseas scholars in this field."

Sparse vegetation and continuous rainfall have led to many relics being discovered lying on the open ground. However, it is still not easy to spot them in an area of around 16 square kilometers.

"We can only walk all around the area," Zhao says, recalling the tough but exciting days spent working in the field. "If we traveled in a vehicle, important findings could be easily overlooked."

Zhao and his colleagues identified 14 key excavation sites by Lake Bogoria, where 5,000 pieces of stone tools－choppers, scrapers, adzes and pickaxes, among others－were unearthed. On a 2-square-meter spot alone, over 700 relics were found within a 15-centimeter-deep layer of earth.

"There is no doubt that the site used to be a workshop," he says. "The adoption of the Levallois technique (a distinctive type of stone knapping) to create these highly standardized stone objects was apparent, where it functioned much like a modern assembly line. The ancient humans who used this process had a strong cognitive ability."

The site at Lake Bogoria was accidentally unearthed by a local villager who was a guide for the Leakey family, a group of renowned British archaeologists credited with many key findings on early-stage humans.

Standing in a local museum, surrounded by a myriad of relics dating back more than 2 million years, Zhao realizes how difficult it is to catch up with Western scholars, who have been studying the origins of humans for over a century.

Nevertheless, for Zhao, traveling to Kenya has not only been an academic pilgrimage. He says through the ongoing project, and following key findings in China in the recent years, Chinese scholars can also have their voices better heard in the study of modern humans－which is thought to have begun some 200,000 years ago.

According to current Sino-Kenyan agreement, the research on Lake Bogoria site will last for four years, but Zhao expects that to be extended.

"The Leakey family were stationed in Africa for decades," he says. "We need to adopt a similar attitude and focus on one place for a long time. Harvests only follow persistence." 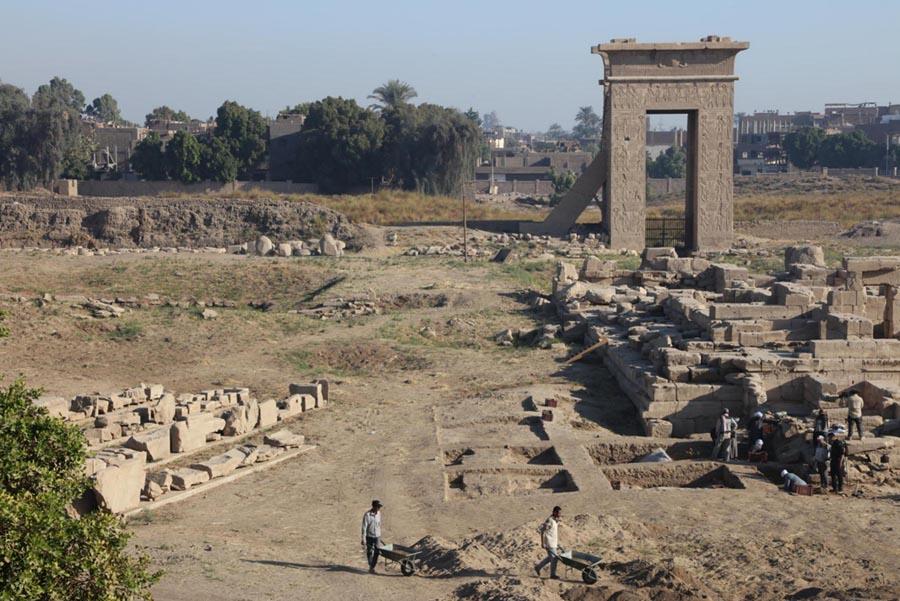 Temple of Montu in Luxor witnesses the first Sino-Egyptian joint excavation on the history of ancient Egypt. (Photo provided to China Daily)

After lengthy preparations in 2018, China's first archaeological excavation in Egypt formally kicked off in November. In Luxor, local archaeologists welcomed four Chinese scholars from the Institute of Archaeology, CASS, as part of a joint research project at a key site of the New Kingdom period (16th century-11th century BC).

Academics from the two countries are working together to unveil the splendor of the Temple of Montu, which was dedicated to the Egyptian falcon-god 3,300 years ago, using 3D modeling technology alongside the excavation of the architectural ruins.

French archaeologists worked there in the 1940s and 1950s, but their efforts were curtailed by war and social turmoil, and old findings litter the abandoned site covered by thick grass.

"The stones relics suffer from severe weathering, and many previously recorded inscriptions have disappeared－but luckily most areas remain untouched by archaeologists," says researcher Li Xinwei. "We hope our excavations will help to figure out how this temple was constructed and its status during the New Kingdom period."

He adds that preservation work is involved at every step of their studies. A new warehouse and a workshop for this program had been constructed ahead of the excavation.

For Chinese archaeology, fieldwork in neighboring countries can also help with research back home.

At the Gol Mod No 2 graveyard site in Mongolia, for instance, scholars from the Henan Provincial Institute of Cultural Heritage and Archaeology and Ulaanbaatar State University joined forces last year to unearth the tombs of Xiongnu nobles－the powerful nomadic ethnic group appearing in ancient Chinese historical records, speculated to be the predecessor of the Hun.

Many exquisite cultural relics were found in two tombs dating to the period of China's Western Han Dynasty (206 BC-AD 24), including a pair of gilded silver dragons, jade belt hooks and jewels.

The American Journal of Archaeology listed the finding as one of the "top 10 discoveries" of 2019.

Going further north, a team of Chinese archaeologists from the Changchun-based Jilin University worked with their Russian counterparts at Pinchuka-6, a large-scale grave site dating back to between the 4th and 6th centuries that was discovered deep in the Siberian forest.

"It indicates that even people living in the north of Siberia had a connection with North China at that time," Quan says. "A lot of focus is placed on the study of ancient ethnic groups to the north of Chinese border, but a clear picture of what life was like in Siberia remains a mystery to most Chinese archaeologists. It is essential for us to have this program and explore the sphere of influence of East Asian cultures."

"Today's international steps by Chinese archaeologists would have been unimaginable even five years ago," says Bai Yunxiang, a senior researcher from the Institute of Archaeology, CASS. "Frankly speaking, Chinese archaeologists' understanding of foreign sites is still insufficient. More projects will help us join the dots and eventually build a systematic map of knowledge about the culture of other countries."

He also expects Chinese archaeologists to have a growing influence in global academia.