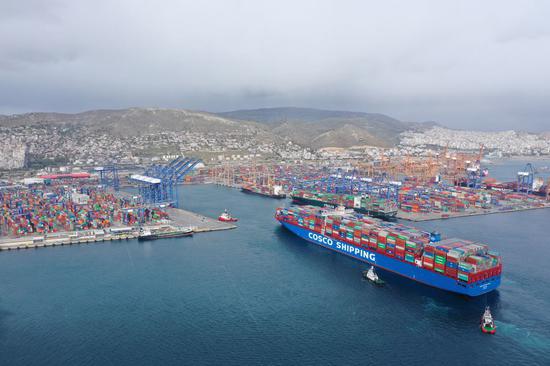 Greece and China have proved their friendship in recent years. Looking into the future, Greece expects to enhance ties with China and build a brighter future together, Greek Minister of Development and Investments Adonis Georgiadis told Xinhua in a recent interview.

Greece and China are bound together by their cultural heritages, which represent ancient civilizations of the West and the East respectively, said Georgiadis.

China supported Greece during the difficult years of the debt crisis which brought the country to the brink of default, the minister said.

In the post-bailout era, Greece expects China to stand by its side as a partner in the future, he said.

In recent years, China has become one of the biggest investors in Greece, Georgiadis said.

According to data from China's Ministry of Commerce, total bilateral trade between China and Greece reached 7.06 billion U.S. dollars in 2018. In the first nine months of this year, the two-way trade topped 6.35 billion dollars, up 21.4 percent year-on-year.

So far, Chinese investments in Greece have exceeded 2 billion dollars, providing over 3,000 direct jobs in Greece.

While talking about Greece's Piraeus Port, a flagship project in bilateral collaboration, Georgiadis voiced confidence that the cooperation will flourish.

In 2016, China Ocean Shipping Company, also known as COSCO, acquired a majority stake in then struggling Piraeus port. The Chinese company's subsidiary started managing the port's container terminals in 2009, helping to promote the port's container throughput from 880,000 TEUs (twenty-foot equivalent units) in 2010 to 4.9 million TEUs in 2018, which is ranked second among all Mediterranean ports.

The image of Greece's largest port has changed in recent years, Georgiadis said.

"This investment will go forward in the next step and the political will of our government is to help COSCO investment to be much bigger for good reasons for the Greek and Chinese people," he said.

Looking beyond the port, Georgiadis stressed that the two countries have agreed to make investments in renewable energy, logistics and infrastructure.

These investments will benefit the Greek economy and make Greece-China ties stronger, he said.

"If we implement all the things we signed ... our relations will be even closer. I am very optimistic about the future of Greece-China relationship," he added.

"Since Greece now is in a much better condition than it was 10 years ago in all aspects, I am very confident that the future of Greece is going to be better. In this brighter future, we always want to think China as a partner," he stressed.