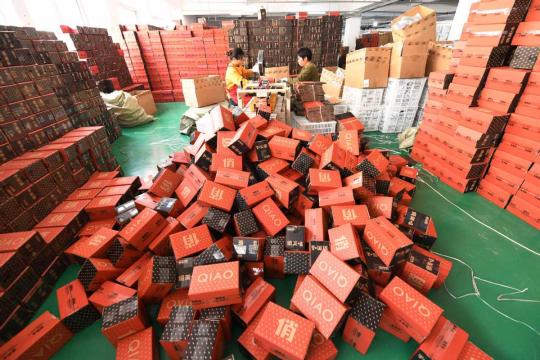 Lower-tier cities and small towns in China used to be regarded as less sophisticated, but the recent better-than-expected performance of some e-commerce and retail companies in such places has shown that they have impressive purchasing power as well as the potential to spawn new business opportunities outside the fiercely competitive markets in higher-tier cities, industry insiders said.

Jiang Fan, president of Tmall and Taobao, Chinese e-commerce giant Alibaba's online marketplaces, said at a conference in September that more than 70 percent of their new consumers came from lower-tier cities and small towns over the last two years. New users spend on average more than 2,000 yuan ($281) in the first year after their registration.

Dyson, a household appliance maker from the United Kingdom, reported a 118-percent rise in sales in Chinese lower-tier cities this year, compared to 21 percent in first-tier cities, according to a report from global consultancy Prophet.

Chinese retailer Suning also showed its sales of electric toothbrushes, dish washers and floor mopping robots in county-level markets increased by 35 percent, 497 percent and 313 percent in the second half of 2018 compared with the first half.

Dong Zhuli, deputy secretary-general of the China Consumers Association, said at a forum in October that economic growth is now mainly driven by consumption, that's why the society is working on stimulating consumption in areas like holidays, nighttime sales and lower-tier markets.

"Small-town people face less life pressure and have more time for consumption. As the competition in the first-tier cities became fiercer, heading for the lower-tier markets became a necessity for companies to drive new business growth," said Xu Feifei, associate partner of Prophet.

According to a research report from consultancy Accenture, consumers in third-tier cities and below contribute about 70 percent to total consumption of the country now, whose disposable income is growing and access to information is expanding amid the quickening of urbanization.

"China is a big retail country, whose strong purchasing power is hidden in lower-tier cities," said Zhang Xun, managing director of Accenture Strategy in China, adding the growth of retail sales in third-tier cities and below reached about 15 percent in 2017, compared with 7 percent in first-tier cities.

Almost all categories in the consumer goods industry - home appliances, dairy products, commercial vehicles, computers, communications, and consumer electronics - have expanded such markets, in accordance with the country's strategy to drive consumption in lower-tier cities and small towns, and the development of internet, he said.

He also said developing business in such markets is good for companies to "reallocate idle capacity, lower costs and gain profit from a large group of potential customers".

However, winning with these consumers is no longer simply pushing what was popular in higher-tier cities, the Prophet report showed. Brands need to adapt their business model and localized strategy to better fit the lifestyles in lower-tier cities, it said.

Xu said products with high unit price and low purchasing frequency, like luxury goods, are most attractive in lower-tier markets, driven by the affluent and the growing middle-income group. Since many brands tend to attract those consumers with cheaper price, price wars are fierce.

The categories of products in higher-and lower-tier cities are quickly moving toward convergence, which is expected to intensify competition. The services sector, including online education, tourism and housekeeping, will have more growth space for business, he said.